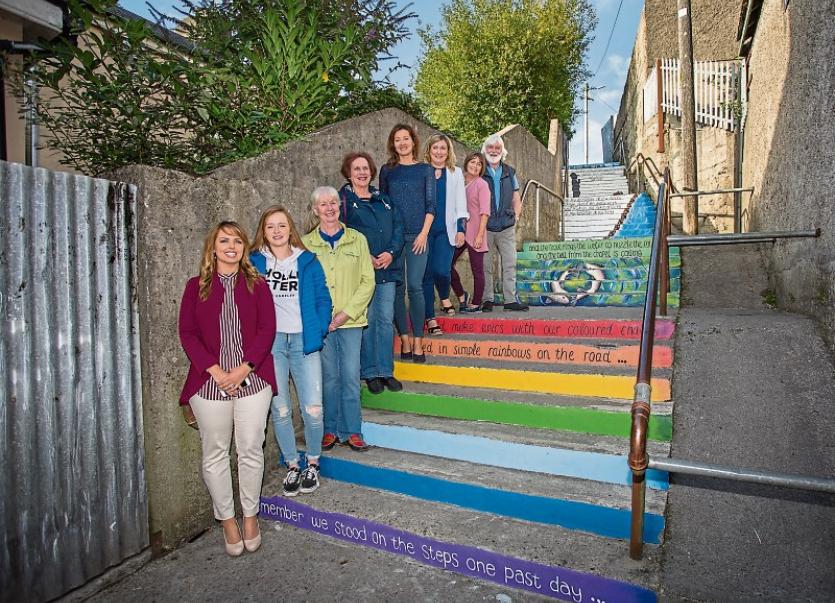 POET Michael Hartnett would have loved it. Nineteen years after his death, the Mass Path steps in Newcastle West which were a regular  part of his everyday life in boyhood, have now been transformed into a magical path, a thing of beauty and colour where each step is adorned by lines from his poetry.

The transformation has come about through a joint initiative of the local Tidy Towns committee and the local Arts Committee and the work was carried out by Newcastle West artist Marian Sugrue Brouder, who now teaches art at Coláiste na Ríochta in Listowel.

The idea for this innovative project was sparked when Marian spotted photographs, The 12 Most Beautiful Steps in the World on the Bored Panda site.

“Marian sent me a link to The 12 Most Beautiful Steps and asked,  wass there somewhere we could do this?”, explained Vicki Nash, who is chairperson of both the Arts Committee and the Tidy Towns Committee. Straightaway, she added, she thought of the Mass Path and then of Michael Hartnett’s poetry.

The Mass Path, a set of steep steps,  links Maiden St, where the poet was born, and Assumpta Park, where the family moved to after it was built and occupied in 1951. The street, the steps, the housing estate, all feature in poems written by Hartnett.

For Marian, bringing Hartnett’s poetry into the mix, was a great fit. “I lived in Assumpta Park as a child and I would have used the steps going to school every day,” she explained. She researched Hartnett’s poetry, looking for lines that would resonate, appeal and would link in with the steps.

And she found them, in plenty. The lines she eventually used call up some of Hartnett’s own memories of childhood, of Maiden St, of hours spent by the river and Marian’s design skillfully weaves words and images.

In preparation for the work, Vicki Nash explained, the local council agreed to skim the risers on the steps.

In all,  the project was completed over three weeks. Marian  was assisted by her niece, Leaving Cert student Letitia Cotter and members of the local  Foróige club also came to give a hand.

What really pleased her, Marian added, was the very positive response they got from people while the artwork was being done. “People came to chat and to talk,” she explained. “We got lots of really positive comments.”

Go see for yourself. Walk the steps. Read the lines. And smile.