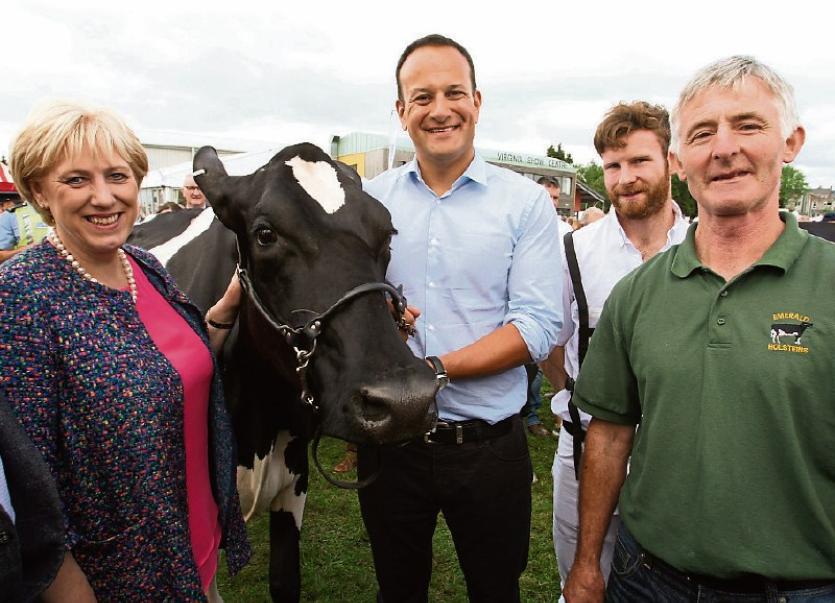 Diageo’s cream supplier, Glanbia co-sponsored the competition for the past 35 years. It rewards strength and form in body conformation as well as proven excellence in quality milk production.

Taoiseach Leo Varadkar was even anxious to get his photo taken with Donal’s prize cow.

It capped a great year for Donal and Kathleen, and their three children – Ann, Thomas, Caitriona, and their herd – Emerald Holsteins. Milliedale Dusk Rhapsody (EX94) was crowned supreme dairy champion, and also won best udder at Charleville show. Mr Keane praised all the entrants for the calibre of pedigree cows on display and he congratulated Virginia Show on 35 years of the All-Island Champion Dairy Cow Contest.

“The competition attracts the super-elite of the Holstein Friesian breed with a €10,000 prize fund on offer,” said Mr Keane.

“It is the hard work and community spirit of exhibitors, competitors and volunteers that have combined to make this particular show such an enduring success for 77 years,” he added.

Mr Murphy said: “Baileys is one of the great international food and drink success stories to come out of Ireland.

“The Diageo Baileys Champion Cow event celebrates the drink’s heritage and the source of its primary raw ingredient, namely the farmlands and rich pastures of this island, that give our agri-food industry such world-class credentials.”