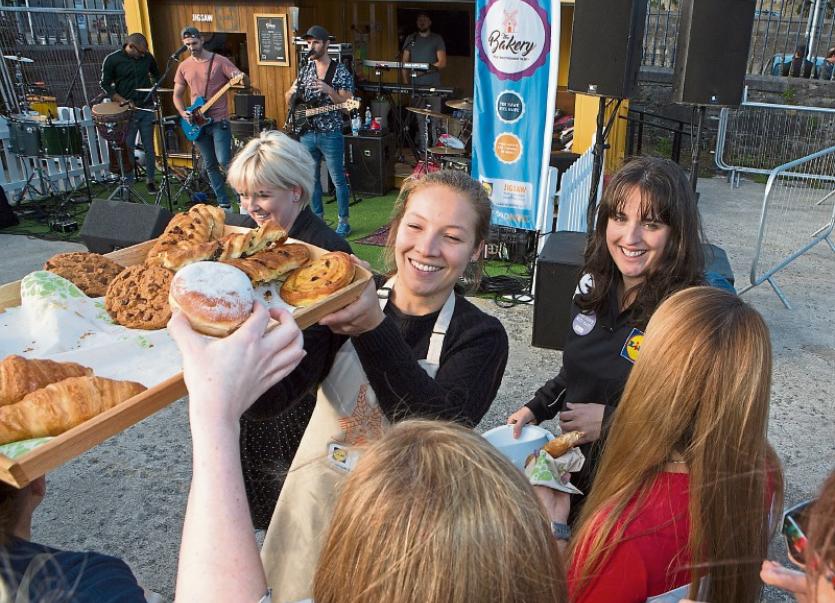 Volunteers hand out savories and confectionary at the launch of Lidl Ireland's new pop up 'The Bakery' in Limerick | PICTURE: Liam Burke

A POP-up bakery in aid of youth mental health charity Jigsaw raised much-needed funds during a takeover of the Potato Market.

The aim of The Bakery, run by Lidl Ireland, was to raise money while also encouraging positive mental health through mood-boosting events and a friendly atmosphere.

The pop-up cafe ran from Thursday to Sunday, with events taking place in the evenings. Hermitage Green and Nile St James played intimate gigs at the space, while laughter yoga and mindfulness events also helped to raise funds.

“The Bakery had a great weekend in Limerick,” said a spokesperson for Lidl Ireland. The final tally of funds raised for Jigsaw will not be announced until the full campaign - which includes an in-store promotion where one cent of every bakery item sold goes to Jigsaw - is over in two weeks time.

Jigsaw is the National Centre for Youth Mental Health, and provides free, confidential and professional support to young people between the ages of 12 and 25 in locations nationwide. Its Limerick branch is based in Arthur’s Quay.

Hundreds of Limerick people turned up at the pop-up cafe over the weekend to buy a treat and chat, all in aid of mental health services. Former Rose of Tralee Maria Walsh was ambassador for The Bakery.

“It’s not often that we get to sit down and take a moment in our busy lifestyles. Youth mental health is something I am hugely passionate about – we all have a role to play,” she said.

Lidl recently announced the launch of a three year partnership with Jigsaw, which saw the discount supermarket pledge to donate €1m to the charity over the three-year partnership.

The partnership also aims to raise awareness of Jigsaw’s One Good Adult campaign, which encourages young people to confide in one adult in their life, be it a parent, sibling or teacher, to gain support and advice.

The campaign encourages listening, encouragement and awareness to become One Good Adult to a young person in their life.