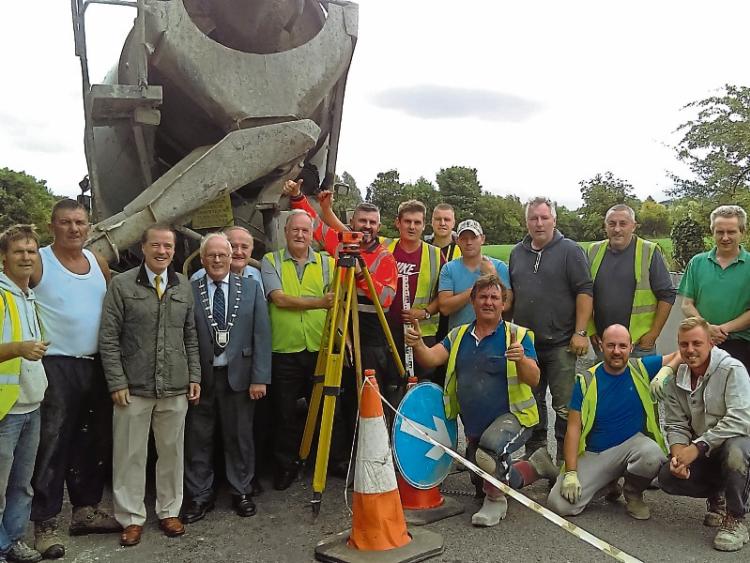 A LONG-RUNNING dispute in Nicker over which side of the road a footpath would be built has been resolved.

Local residents put up placards on the stretch of road on a steep hill and bend to Nicker National School last May. The signs read “dispute on here” and “in the interest of children’s safety residents object to a footpath at this side of the road”.

They said it didn’t “make sense to put the footpath on the side of the road where there are no houses”.

Last September, residents were so anxious that a footpath be built to prevent a “child from being killed” they said they were willing to do it themselves.

And over the last month they have done just that with council funding. Only a small piece of footpath and a ramp has to be completed. Children can then walk from the school all the way in to the village.

A council spokesperson said they discussed the footpath issue with the various community members in Nicker.

“The council has a developed a policy as sort of ‘rules of engagement’ code of practice for voluntary groups who wish to carry out specific works. There are stringent criteria, all of which must be met to the council’s satisfaction before any funding is granted.

“A total of €25,000 was allocated to the voluntary group from the general municipal allocation of the Cappamore – Kilmallock municipal district and the council’s development fund to construct the footpath and to install a pedestrian crossing.

“As outlined in the policy all works must be completed to the required standard set down by legislation,” said the spokesperson.

Timmy Long, spokesperson for the residents, said over the last 12 months a controversial campaign had been conducted by residents on the road to have the path laid in front of their houses but Limerick City and County Council preferred side was at the opposite side in front of a wall.

Mr Long said it will now provide a safe walking path thanks to the voluntary labour and expertise of locals, Dillon Brothers Construction and the council paying for materials.