Now councillors are in a twist over Nicker's new footpath location 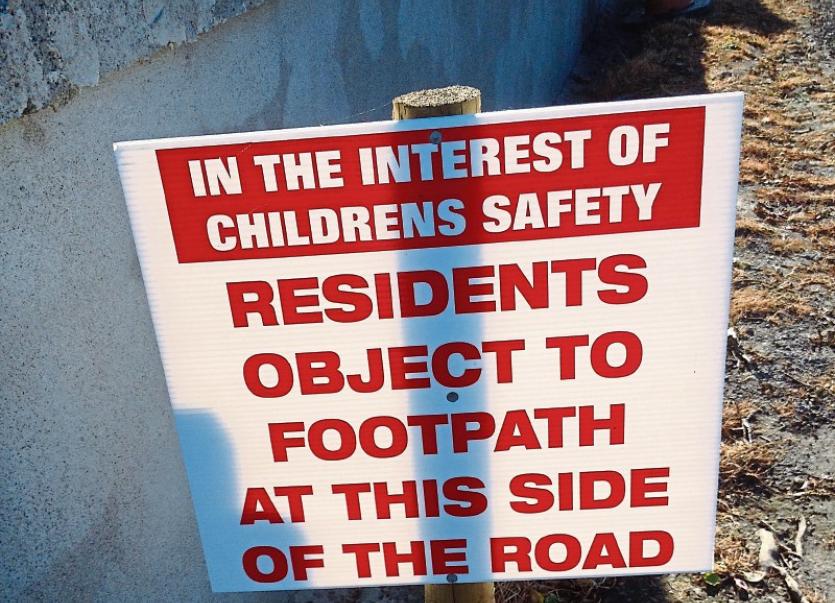 NICKER residents erecting protest signs and vowing to stop a footpath was raised at the most recent Kilmallock-Cappamore municipal district meeting.

The signs read “dispute on here” and “in the interest of children’s safety residents object to a footpath at this side of the road”. They argue the pathway should be on the other side of the thoroughfare, located on a steep hill and bend to Nicker National School.

In a front page story in the Limerick Leader earlier this month, the residents said they would picket any works and said they wanted to address a municipal district meeting.

Under any other business, Cllr Eddie Ryan, chairman, said the concerned locals wanted to address the next meeting.

However, Cllr Bill O’Donnell put down a counter proposal that councillors be fully briefed by engineers on the available options before the residents address the meeting.

Cllr Eddie Ryan said this was setting a “precedent”.

“We’ve always met anyone who wanted to meet us,” said Cllr Ryan.

John Sheehan, executive engineer, said €23,500 was received from the general municipal allowance (GMA) for the scheme to Nicker village.

The side of the road where the wall is located is where upto 10 protest signs have been erected.

Billy Harty, one of those opposed to the plan, said it doesn’t make sense to put the footpath on the side of the road where there are no houses.

“All the homes are located on the other side. We want the footpath to continue down from where it ends. Bring it all the way down and put a pedestrian crossing at Nicker National School so they can cross there safely. What is the point in kids having to cross the road to get on the footpath? If you’re going to do a job, do it right,” said Billy.

At the municipal meeting in John the Baptist Community School, Mr Sheehan said “safety of school children” and “economic” factors were his main concerns in where to put the footpath.

“If we are to put the footpath on the Harty side we would have to adjust the road height at serious cost. It is a lot cheaper to put it on the left hand side – the same side of the school,” said Mr Sheehan.

But either way, €23,500 won’t construct a footpath on either side. Mr Sheehan said he was planning on using that money to put in public lighting and tidy up the area beside the wall. He estimated a price in excess of €100,00 to build it on the Harty side.

“If I had the money it would be no problem,” said Mr Sheehan.

Cllr Ryan said it “makes sense” to continue the footpath from where it ends near the parochial house.

Cllr Gerald Mitchell agreed but said it if public lighting is going on the wall side is the council not “confining” itself to putting the footpath on that side.

In backing Cllr O’Donnell’s proposal to get a full briefing on costings and options, Cllr Mike Donegan said he needs to learn more about the situation before making an informed decision.

In summing up, Cllr Ryan said: “We are not going to do something outside people’s houses that they don’t want.”

It was agreed to postpone inviting the residents until councillors are given a full presentation.

Cllr Bill O’Donnell said at the end of the day “there are only two sides of the road”.

“There is a significant cost difference between the two. There are a lot of children in the village who walk to the school. I’m sure their parents want safe passage for their children as long as there is a footpath. I’m sure those families want to have it done sooner rather than later,” said Cllr O’Donnell.