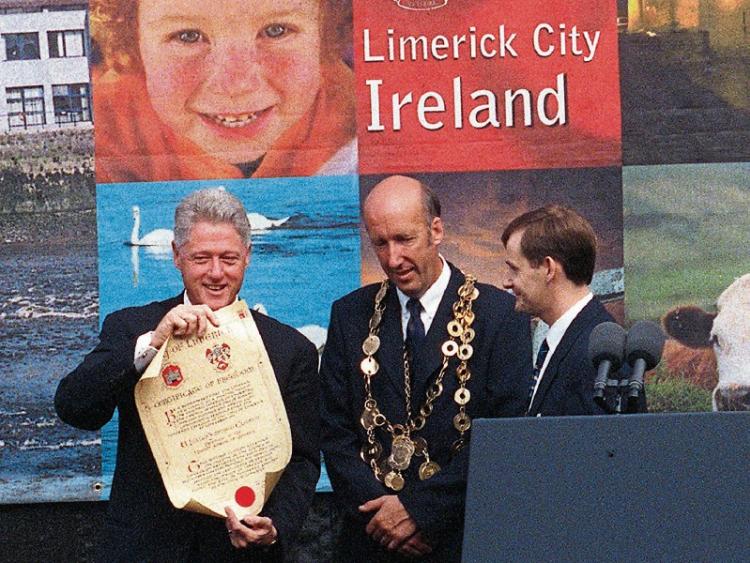 President Bill Clinton pictured with the then Mayor of Limerick, Joe Harrington on September 5, 1998

TWENTY years ago this week, the eyes of the world were focused on Limerick as the city received one of its most high-profile visitors in the shape of US president Bill Clinton.

Saturday, September 5, 1998, saw Limerick pull out all the stops to ensure the 42nd President of the United States of America (USA) received a céad míle fáilte.

Tens of thousands of people packed into O’Connell Street in scenes reminiscent of our victorious hurlers homecoming last month – and his wide-ranging speech was beamed around the world.

The Limerick Leader ensured the Democrat politician was welcome in the city, with the front page of our flagship county edition bearing the stars-and-stripes and the headline ‘Fáilte Mr President’.

Back home, President Clinton was facing removal from office over his affair with Monica Lewinsky. But he was held in high stead here, given his role in the Northern Ireland peace process.

His visit came just weeks after the Omagh atrocity – and in his speech President Clinton heavily referenced the Troubles, as well as other conflicts of the time in his speech – singling out the crises in the Balkan region of Europe, Rwanda and the Middle East.

To cheers, as a reference to the Good Friday agreement, he said: “But because of what you have done in Ireland in 1998, you have made it possible for me to tell every warring, feuding hating group of people trapped in the prison of their past conflicts to look at Ireland and know there can be a better day.”

“Ireland was a different place. People were so shocked by Omagh, they were looking for someone to be a catalyst for change. Bill Clinton was someone with such a huge international profile. Someone coming in who could help the peace process. People respected him for that,” said former Limerick Leader reporter Laura Ryan.

Laura, who now works as communications boss at Limerick council, had joined the Leader that summer after graduating from college and was a key part of this newspaper’s team covering the presidential visit.

“As a reporter, hearing the President of the USA is coming to your city, and you’re getting to work on it, it was just an unbelievable opportunity,” she said, “Up to then, council meetings may have been as exciting as it got!”

Auctioneer Pat Kearney, who was Chamber president back in 1998, played a key role in bringing Clinton, and his wife Hillary to Shannonside.

Taking up the story this week, he said: “We were told his team were investigating Ireland as to where he would speak. Brendan Woods [former Chamber secretary] and I were informed his team would be in Limerick at a hotel, on a certain day at 3pm. We went to the hotel and waited there for an hour.”

When they finally met, Pat said the pair made a “big sell”, and in a short period of time, they agreed Mr Clinton would visit..

While the Chamber, and the City Council had their own ideas on where the President would address the crowd – favouring the courtyard outside City Hall in Merchant’s Quay – it was his advisors who had the final say.

“One of the security officers called us into the South Court Hotel, where the headquarters were. She told us in no uncertain terms that the president would speak at ‘O’Connell and Thomas’,” he said in his best American accent.

This, of course, refers to the junction of O’Connell Street and Thomas Street, and from there, it was a case of everyone putting on the green jersey. Bank of Ireland allowed use of its ground floor, local firms sponsored stands and sound equipment, and even businesses supplied electricity, after a power fault on the eve of Mr Clinton’s visit!

Conn Murray, now the chief executive of Limerick Council, was the acting city manager at the time of the visit.

He says the effort put in by council staff was “24/7”, over a ten day period.

“I remember former city architect Seamus Cooke’s work, stage design, the electrics, co-ordinating all the meetings between the departments, the agencies. his putting 400 phone-lines into Istabraq Hall. The logistics of creating City Hall as the press centre was part of it. We worked with guards from all over the country," he said.

With the visit of the leader of the free world, a staggering level of security is natural.

Laura said: “We did a huge amount of colour stories around the preparations. We had a massive emphasis on the secret service. There were a lot of stories about them basically going down into manholes, going into sewers. I think the manholes had to be welded down during his visit.”

It even got to the stage that the South Court Hotel, where President Clinton’s entourage were staying became a tourist attraction in itself, such was the interest in people seeing the secret service staff!

When Mr Clinton finally arrived – having landed in Shannon on Air Force One, and spending the night in Adare Manor – Laura added the city experienced a “massive love in” as stars and stripes flew proudly alongside the Irish tricolour.

“I think Limerick was picked as we were going through a regeneration and an urban renewal. It was highlighted in the speech by the mayor, and by the chamber president,” she explained.

In a ceremony, President Clinton was given the Freedom of the City from Mayor Joe Harrington, who this week admits he was not in favour of the award.

But it meant a lot to the President, who said: “This means when I am no longer president, I can come to Limerick too, and I thank you! Now you have given me the Freedom of the City, I can call you my fellow citizens!”

He also had kind words for Texan company Dell, which remains a key employer in Limerick today, and looked towards the new millennium which was under two years away.

Unlike today, Laura did not have to file copy for the Leader until 24 hours after the President had left Limerick – there was no Twitter or smartphones back in 1998!

“We were able to really enjoy the day and experience it without the pressure. There was a party atmosphere. People were just so proud and excited that the president had chosen Limerick,” she said.

President Clinton shook hands with many people, Laura comparing his treatment to that of a “rock star”.

One of the iconic images from the time was of him reaching out to six-year-old Jack Kennedy from Adare, an image which graced the front page of the Leader the following week.

Jack, now 26 and living in London, said: “It was a really big deal for me. A lot of reporters were asking me name.”

In fact, following the visit, Jack, then a student at the Model School, wrote to the President, as well as the American ambassador Jean Kennedy-Smith thanking then for the visit.

But there were only a select few who actually were able to get to speak to the President personally.

Mr Murray was one, and he recalled: “I told him ‘you’re very welcome Mr President, and he remarked ‘Aren’t you a bit young for this job?’. I replied ‘some might say that at the end of the day’.”

Mr Kearney also took time to give a present of a peace badge to the President, designed by local artist Una Heaton – much to the chagrin of his minder who insisted on only a brief handshake!

Much attention was focused prior to the President’s visit on Cllr Harrington – a firebrand who was elected first citizen against the odds earlier that year.

Many focused on what he decided to wear, with calls for him to don the traditional red robe of Limerick City Council.

“This debate reached ridiculous proportions. I had never worn the robes and right up to going on stage, councillors were still pressing me to do this. For some politicians, optics were more important than politics,” he said.

Mayor Harrington revealed that members of his group, People’s Democracy, urged him to step aside as first citizen and protest instead.

He felt this approach was “not practical”, and instead debated American foreign policy with Clinton. He was expelled from his group as a consequence.

Mr Murray – who still has the pen which President Clinton signed the Freedom treaty with – said: “The feel good factor lasted so long. It’s like that time again in Limerick, that sense of collaboration between the Chamber, UL, all the stakeholders and that ‘can do’ attitude and energy.”

For Laura, who spent three years at the Leader up to 2001, before moving to TV3, Clinton’s visit remains her career highlight.

“Without a shadow of a doubt, it was the biggest story I ever covered. Nothing could compare with it,” she concluded.