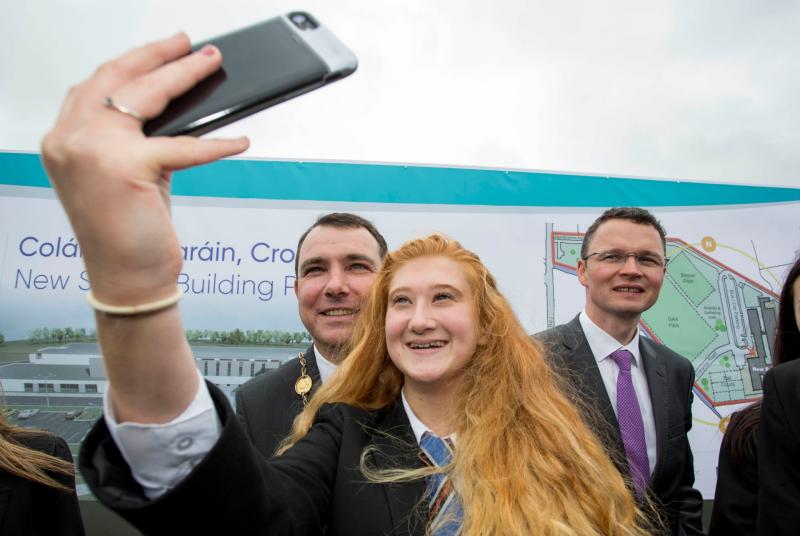 WORK on the greenfield site where a state of the art secondary school will be constructed in County Limerick has officially commenced after a sod-turning event.

The construction of the new building for Coláiste Chiaráin in Croom will now get underway, after several hurdles over the last number of years delayed the long-awaited project.

This Friday, August 31, marked an important milestone for education in Croom as the work was officially launched by Minister of State, Patrick O’Donovan TD.

“I am immensely pleased to be here today on what is a historic day for Colaiste Chiarain and the town of Croom,” he said.

The beginning of the project was marked this Friday with a ceremonial tree-planting and turning of the sod by Mr O’Donovan and Coláiste Chiaráin students Leah Donnelly and William Dore.

The event also marked Matt Power's last day as acting principal of the school. The role will now be taken over by Gerard O'Sullivan, who was previously the deputy principal.

The major building project has been in the pipeline for well over a decade, and the “sub-standard” conditions at the current school building have been raised a number of times in the Dáil.

Opening today’s ceremony, Chief Executive of the LCETB George O’Callaghan said: “Limerick and Clare Education and Training Board is delighted that at long last work can commence on the construction of a new building for Coláiste Chiaráin on this greenfield site."

George O'Callaghan, chief executive of LCETB says that many people may have thought the @colaiste project would never come to fruition pic.twitter.com/8CNlWh7mOC

“It has to be acknowledged that there have been long delays and twists and turns in getting to this point. At times I know that people felt that this project would never come to fruition. It is a testament to the patience, determination and perseverance of many people that the day has finally come when we can see at last the tangible progress on this development. This is indeed a special day for the Coláiste Chiaráin school community.”

Mr O’Callaghan continued: “I would like to thank all those involved: staff, students and their parents, members of the Board of Management, local public representatives and the local community for their commitment and perseverance in ensuring that the project would happen.”

The new school development on the 22 acre (8.9 hectares) site at Skagh, Croom, consists of a two-storey building of almost 10,000m² designed by Healy Partner Architects.

This is the plan for the new @colaiste campus in Croom. Lots of sporting facilities planned around the school on the 22 acre site pic.twitter.com/b2H7wHuP7P

Minister of State Patrick O’Donovan said: “For years I, together with my colleague Cllr Stephen Keary, have worked tirelessly with the Minister for Education and the Education and Training Board to secure this vital development for Croom.”

“During that time there have been many disappointments and setbacks. While today feels like a new beginning, it was a long and often challenging journey to get here. However, we persevered, because Croom and its young people deserve nothing less than this outstanding development.

“Going forward I wish everyone involved in the construction phase of this mammoth project the very best of luck. Education is one of the most precious things in the world and to be part of something so important to this community is a great privilege,” he added.

This will be "one of the biggest civil projects" in Limerick next year. @podonovan says construction process will be a boost to local economy pic.twitter.com/h4W2U3YgUs

“It is just one of a number of new school projects the government are delivering on across the county. In places like Doon, Abbeyfeale, Kilmallock and Newcastle West we have made substantial investments in our second level schools.Other secondary schools have also received funding for refurbishment and we have also provided significant resources for primary schools across Limerick including new schools, extensions and refurbishments,” added Mr O'Donovan.

The Croom campus will incorporate over 60 teaching spaces which will facilitate delivery of the widest-possible curriculum to 850 students.

The incredibly talented @colaiste school choir singing at the site where their new long-awaited school will be built #ColáisteChiaráin pic.twitter.com/g56ZMvSr8D

The development of pitches and external play areas on the site, together with a full-sized PE Hall will enable a diverse range of extra-curricular activities on the new school campus.

In addition, the inclusion as part of the project of a Special Education Needs Unit aims to ensure that the educational needs of the entire school community are met.

Tony Brazil, board of management, says that @colaiste is an important part of the development of Croom pic.twitter.com/VhuZispj5r

Speaking at today’s ceremony, Mayor of the City and County of Limerick, Cllr James Collins said: “I’m delighted to be with you today for the official sod turning for the new school for Coláiste Chiaráin.

There have been many false dawns and the planning regulations have been well-tested for this project, says Mayor @jamesjcollins pic.twitter.com/1RJVfESVnN

“There have been many false dawns in the quest for a new secondary school in Croom but it is now a reality. It is very important that our younger generation and future generations are taught well. We need excellent teachers but we also need excellent facilities. Today is an important day for the school and for Croom.”

Construction is slated for completion in the final quarter of 2019.