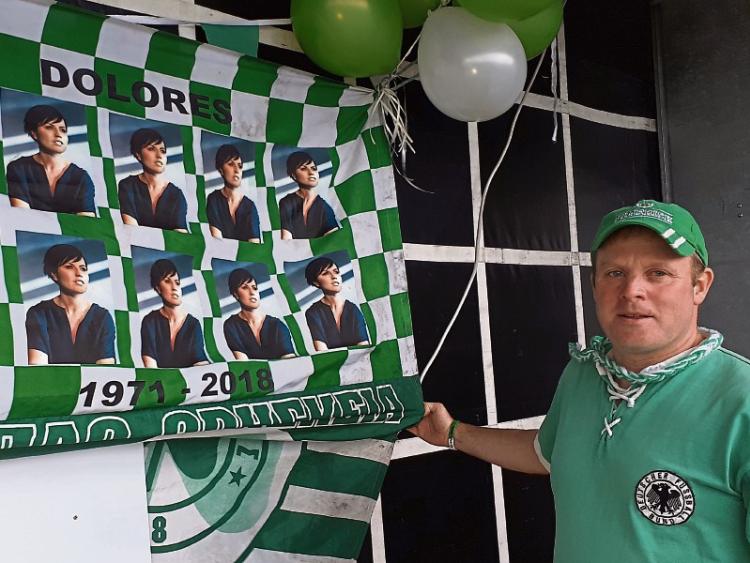 THE Cranberries song ‘Dreams’ has become an unofficial anthem for Limerick’s hurlers as they won the Liam MacCarthy cup.

Although the song blasted out in Croke Park as 45 years of hurt were laid to rest, it was a bittersweet moment following the tragic passing of Dolores O’Riordan this January.

On that day, one Caherdavin fan decided to take the tributes to the Ballybricken woman a little further, making up a flag bearing her image which waved proudly from the lower tier of the Cusack Stand.

​Na Piarsaigh member Seoirse Laffan had already created a super-size flag which followed the Blues during their runs to Croke Park in 2016 and 2018. The sky blue design contained not only the Na Piarsaigh flag, but also the Argentina banner.

Prior to the final, he had designed a second mega-flag, focused on the green of Limerick – with the addition of pictures of Dolores.

“When we beat Cork, coming from six points down, the Cranberries played on the tannoy straight after the game. It was emotional. It was on my mind to have a tribute on the day of the final. I’m glad we got the images printed. I feel it was a mark of respect to Dolores and her family,” Seoirse said, “We have been thinking of Dolores all year.”

One of the quarters of the flag is the green banner of Panathanaikos, which Seoirse picked up when he went to see the Greek side play in Athens in the mid-2000s.

“We took this flag to Croke Park for the 2007 All-Ireland semi-final when Limerick beat Waterford. It was the first time I saw Limerick win a game in Croker, so it was a historic day for us. Unfortunately, we came up one of the greatest teams of all time, that Kilkenny team [in the final]. It continued then. We used to take it to all the games,” he explained.

Now he has improved the flag to make a lasting tribute at hurling games to Dolores, who by her mum Eileen’s admission, was a “tough hurler”.

Elsewhere this week, Askeaton man Michael Griffin has suggested a drab wall in the city centre should be transformed into a homage to our victorious hurlers.

He has suggested a blank wall at Speakers Corner become a mural bearing the image of captain Declan Hannon holding aloft the Liam MacCarthy cup, alongside team mates Shane Dowling and Sean Finn  – with a title of ‘Dreams come true’, in reference to the iconic song.