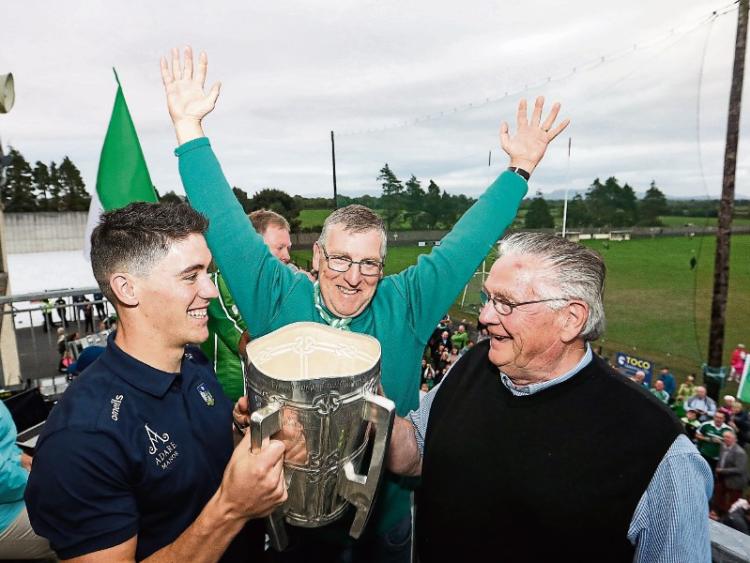 THE LIAM MacCarthy Cup continues to cast its magic spell over communities right across the county as scenes of unquenchable joy and excitement light up the Limerick landscape.

There ​was unconfined joy across Limerick this week, as members of the first winning panel since 1973 returned home with some serious silverware in tow.

Members of the All-Ireland winning panel enjoyed hero-like worship upon returning home to where it all began.

Six clubs in Limerick have, this week, welcomed the Cup to their homeground following its traditional first visit to the captain’s side, Declan Hannon’s Adare last week.

Bruff, home of Sean Finn and Paul Browne, was the latest club to experience the magic of the Cup this Tuesday night, when well over 1,000 people welcomed home their heroes.

Indeed, it was a real homecoming for Liam too, as the cup was brought up past the ancestral home of MacCarthy's mother, Bridget Dineen, in Bruff.

“We are still all on a high. The lads did plenty of photographs and autographs - they are very involved at club level, so it was just great for the kids," said Tom Bulfin, MC for the evening.

A huge crowd descended on Doon – home of four members of the panel ​- on Monday night.

“You would know every face some way, some connection. It is the first time the Cup has been back to the east,” said Richie English, drawing wild cheers from the crowds. “We’ve been to so many places around Limerick it is great to finally get back to Doon with the cup.”

Na Piarsaigh – and their own six panel members were back in Caherdavin on Sunday night.

“This is far better than the Pope visiting,” grinned one fan in the village.

The people of the medieval town of Kilmallock welcomed their four-modern day heroes along with their teammates on Friday night.

Graeme Mulcahy, Barry Hennessy, Paddy O'Loughlin and Oisin O'Reilly were transported through the town on the top of a fire brigade jeep while being led by a garda escort.

John Kiely, meanwhile, took the bus to Galbally for his special return home.

The trophy went west on Thursday night, with a visit to Seamus Flanagan’s club Feohanagh/Castlemahon and the Liam MacCarthy will be in St Patrick’s GAA Club, the home of Gearoid Hegarty this Saturday for a historic first visit to the city team at 4pm.

Then the day after, it will head back west, with appearances at Kildimo/Pallaskenry at 12 midday and then the Knockaderry autumn fair at 3pm.

Trips to other clubs will follow, while it’s likely most primary schools will get a visit from Liam MacCarthy too. We’ll be celebrating into winter!