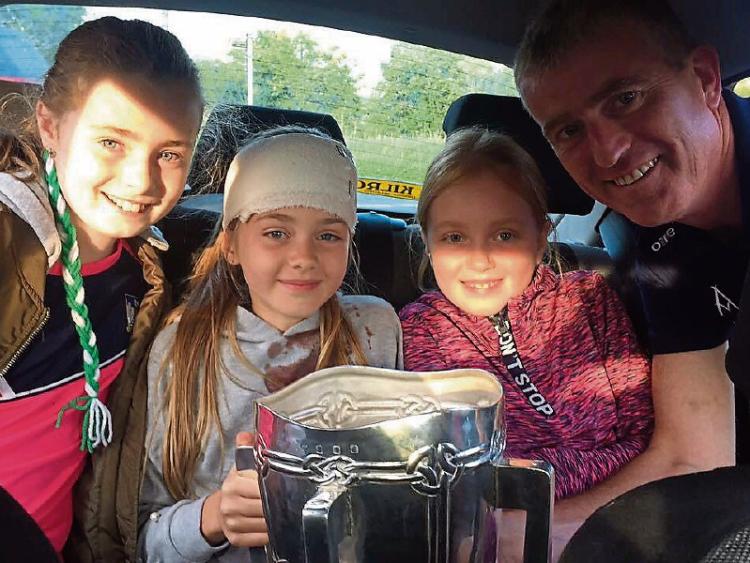 Chloe Rogers, second left, pictured with the Liam MacCarthy Cup after she got an accidental belt of a hurley during the homecoming

WHILE the rest of the county will remember the homecoming in Galbally as the day the Limerick senior hurling manager returned home with the Liam MacCarthy Cup, one little girl has her own unique stand-out moment.

Didn’t the man of the moment, John Kiely climb into the back of Chloe Rogers’ mum’s car with the coveted silverware to cheer her up after she got a nasty belt of a hurley.

“She is doing fine but had to get four stitches on the head. These things happen. I just want to thank the manager for coming over to my  wife's car with the cup and taking this lovely picture,” said Chloe’s dad Shaun.

At 7.30pm on August 22 every public house, shop and home in the village emptied of people for the official welcome home gathering. They had known from 2pm the previous day that manager John Kiely was returning, with his band of brothers, and the cup.

A gazebo was drafted in. All the community was put on notice. Wives and women, boys and husbands all pulled together.

The bollards were lined up, lights were erected around the GAA grounds to ensure that the closing in of winter wouldn’t obscure the views.

And they came from everywhere. A drone circled the skies. As the bus neared The Square in Galbally the Liam Lynch pipe band struck their first note.

The cheers and roars drowned it all out.

“It was just a proud day for everyone to know that one of our own from a footballing parish put it all together and killed the famine,”  Pat O’Byrne, commented of John Kiely, the newly crowned King of the Galtees.

Pat was just one of a strong team who organised the event, including the Galbally GAA chairman Tom Quinlan, secretary Ger Cussen, his brother Bill Cussen and treasurer Brian Chaplin.

“To see the tears that came down people’s faces, it was just ... for them it will probably never happen like that again,” he said.

“The scenery, the cheers and the roars. It was just a beautiful occasion and in fairness to the team, they obliged everyone with signatures and photographs.”

Racing legend Ruby Walsh turned up. He loves a good sport story does Ruby, particularly one which embodies the triumph of hope over adversity.