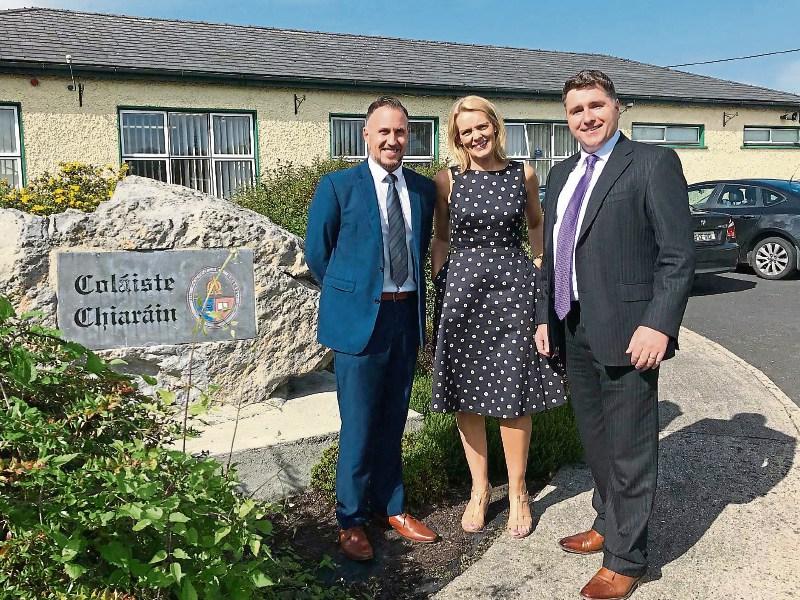 THE SOD has been turned on the greenfield site where a state of the art secondary school will be constructed in County Limerick.

Construction will now commence on the school, the new building for Coláiste Chiaráin in Croom, after several hurdles over the last number of years delayed the long-awaited project.

This Friday, August 31, marked an important milestone for education in Croom as the work was officially launched by Minister of State, Patrick O’Donovan TD.

“I am immensely pleased to be here today on what is a historic day for Colaiste Chiarain and the town of Croom,” he said.

The major building project has been in the pipeline for well over a decade, and the “sub-standard” conditions at the current school building have been raised a number of times in the Dáil.

Minister of State O’Donovan continued: “For years I, together with my colleague Cllr Stephen Keary, have worked tirelessly with the Minister for Education and the Education and Training Board to secure this vital development for Croom.”

“During that time there have been many disappointments and setbacks. While today feels like a new beginning, it was a long and often challenging journey to get here. However, we persevered, because Croom and its young people deserve nothing less than this outstanding development.

“Going forward I wish everyone involved in the construction phase of this mammoth project the very best of luck. Education is one of the most precious things in the world and to be part of something so important to this community is a great privilege,” he added.

It's a big day for students of @colaiste - the sod is being turned at the site for their new school in Croom! pic.twitter.com/wGKwEOpnDV

“It is just one of a number of new school projects the government are delivering on across the county. In places like Doon, Abbeyfeale, Kilmallock and Newcastle West we have made substantial investments in our second level schools. Other secondary schools have also received funding for refurbishment and we have also provided significant resources for primary schools across Limerick including new schools, extensions and refurbishments.”