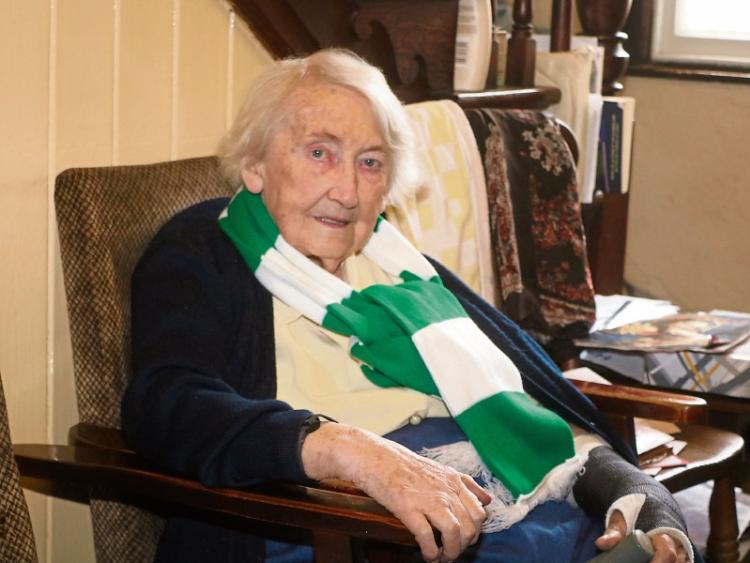 Betty McElholm pictured this week in her home on main street, Kilmallock

IN the autumn of 1933 a 16-year-old girl from Kilmallock was nursing a broken heart.

On a cloudy Sunday afternoon the teenager was stood in Croke Park, where the Cusack Stand is now, tears streaming down her face.

Only hours earlier, on the morning of September 3, Betty McElholm had left the home of her aunt in Kilkenny and travelled by train to Dublin for the All-Ireland hurling final, her heart full of hope for a Limerick win.

With her was her first cousin Tommy Garvan, a Kilkenny man.

“We got lunch up there. There were no tickets beforehand - you could buy the ticket at the gate. There were huge crowds. There was a good share of women as well, so there was.”

Betty, 101, sits on an armchair under the walnut staircase in her home on main street, Kilmallock where she has lived for the past century.

The expectation that surrounded the 1933 final between Limerick and Kilkenny can be gauged by the fact that 45,176 fans thronged Croke Park - the biggest crowd ever for a sporting event in Ireland up to that time.

Another 5,000 fans were locked outside the Croke Park gates to avoid overcrowding.

“I had been to Croke Park several times,” Betty recalls. She saw the great Mick Mackey play “umpteen times”.

“There was a great team in that time. Timmy Ryan, Paddy Clohessy and all those.”

In the closing stages of the game, there was only the smallest of margins between the teams. Limerick had every reason to be hopeful.

“And didn’t bloody Johnny Dunne score a goal. That was the end of it,” says Betty. “There was only two minutes to go when he scored the goal.”

A long silence ensues. Seven seconds of nothing. “And then,” her voice lowering to a whisper, “I started to cry”.

The story goes that when the sliothar hit the back of the net, the word ‘lovely’ left the lips of many a Kilkenny supporter, and from that moment on the goal scorer was known as ‘lovely’ Johnny Dunne.

Yet the mention of one Mick Mackey brings light back to Betty’s eyes.

“Mackey was very skillful,” she says. “I couldn’t hurl myself because I couldn’t hit a ball. I liked all the team. Mackey was a huge star. He was. Everyone was talking about him.”

Casting her mind back to her youth, Betty recalls a time when she and her six siblings could hurl on the street at night. There were hardly any cars at that time. At one time, she remembers, there was only one. “Dr Pat Cleary had it, some kind of a Ford.”

Betty has never used a computer or a mobile phone. She loves watching a good hurling match or rugby game on the TV.

“I will watch the game here. I watch hurling, football and rugby. I don’t bother with anything else.”

Looking ahead to Sunday, she is keeping her cards close to her chest.

“I’m hopeful,” she says, after some amount of coaxing.

And any words of wisdom for the Limerick men on the biggest day of their young lives? “All you can do is your best!”

And so say all of us.