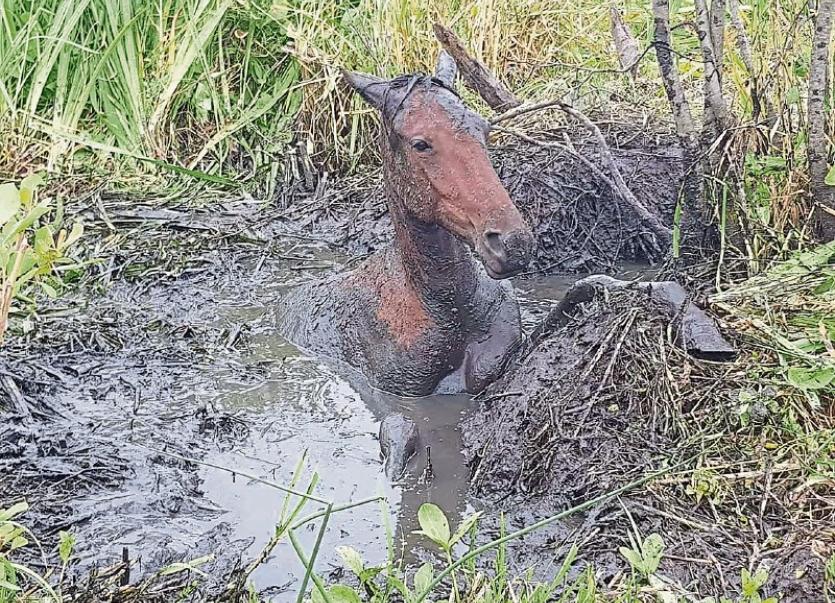 THE RESCUE of a horse in Rhebogue, that got  stuck in the mud, has made international news.

Fox News reported on the local rescue effort, which ended happily last Friday evening when the mare was pulled from a mud pond.

Fox News is one of the most high-profile news sources in the world, and has been endorsed by president Donald Trump.

The story of the mare’s rescue was tweeted to Fox’s almost 18 million followers, potentially making her the most famous animal in Ireland – for 15 minutes, at least.

The good work of Limerick Animal Welfare was highlighted in the Fox article, after the story was originally reported online by the Limerick Leader.

Limerick Animal Welfare received the call from locals and, despite it being out-of-hours, volunteers and kind local horse owners showed up with ropes and straps to help pull the mare out.

She was submerged up to her neck in muck, and unable to pull herself out.

LAW thanked those who helped, including their “tireless volunteer Anna Gallagher” and the Clarkes, Reillys, Eddie O’Doherty, and “all the boys that came to help and brought ropes and straps”.

“They all worked together to pull the mare free from the mud.”

Equine vet Paraic McNamara also attended, and antibiotics were administered to the mare. Her owner then took her home to be stabled and watched over to ensure she would make a full recovery, said LAW.

Volunteer Anna Gallagher, who works with young people in the Horse Education Limerick Project Southside, said that the mare is in good condition and is a well-cared for horse.

The animal was grazing on land that the owner rents, when it got into difficulty in a pond in the field.

“The owner has now taken the mare home to continue to care for her as she was suffering from shock and antibiotics will be administered for a week to ensure infection doesn't set in,” said Ms Gallagher.

“Well done to all those urban horse owners and a huge thank you for coming out to assist in this mare’s rescue.”

Many of those who left comments online congratulated the “everyday heroes” who helped save the horse. The Rubberbandits also tweeted a photograph of the horse.

An American Fox viewer wrote: “I thank God that all of you were in the right place at the right time and saved that horse. You are wonderful... Thank you so much.”