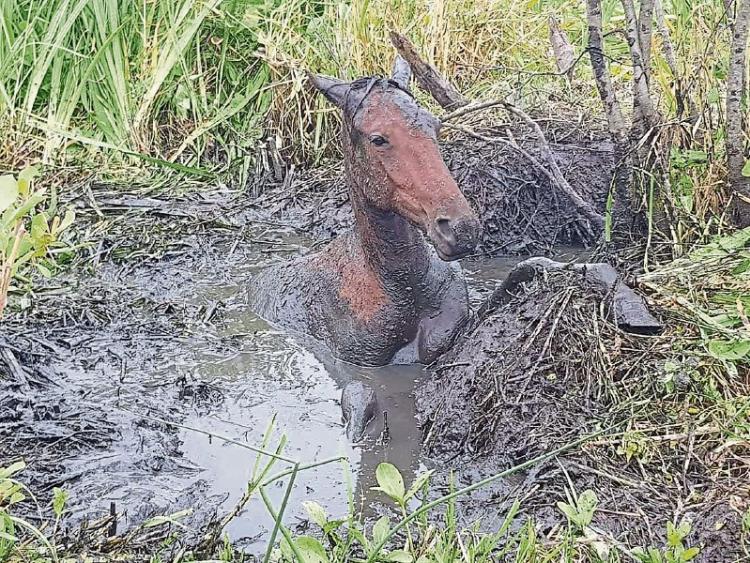 The horse in distress in the pond before being rescued (PICTURE: Eddie O'Doherty)

A HORSE that got into difficulty in mud in Limerick city has been saved by a group of local volunteers.

The mare was stuck in a pond of mud in Rhebogue on Friday evening. She was submerged up to her neck and unable to pull herself up out of the pond.

After receiving an out-of-hours call from some locals, Limerick Animal Welfare (LAW) sent out an appeal on Facebook for more people to come along and help.

Volunteers from LAW were in attendance but asked for more man-power and equipment, such as ropes, to help rescue the horse.

And thanks to the fantastic community response, the horse was saved.

LAW thanked those who helped, including their “tireless volunteer Anna Gallagher” and the Clarkes, Reillys, and “all the boys that came to help and brought ropes and straps”.

“They all worked together to pull the mare free from the mud.”

Equine vet Paraic McNamara also attended, and antibiotics were given to the mare. Her owner then took her her home to be stabled and watched over to ensure she would make a full recovery, said LAW.

Volunteer Anna Gallagher, who works with young people in the Horse Education Limerick Project Southside, said that the mare is in good condition and is a well-cared for horse.

The animal was grazing on land that the owner rents, when it got into difficulty in a pond in the field.

“The owner has now taken the mare home to continue to care for her as she was suffering from shock and antibiotics will be administered for a week to ensure infection doesn't set in,” said Ms Gallagher.

“Well done to all those urban horse owners and a huge thank you for coming out to assist in this mare’s rescue.”

The rescue effort gained a huge audience online, with many congratulating the “everyday heroes” who helped save the horse.

Poor horse near Yurtys Couch today, he’s been rescued and is safe pic.twitter.com/qnSyGMRpCy