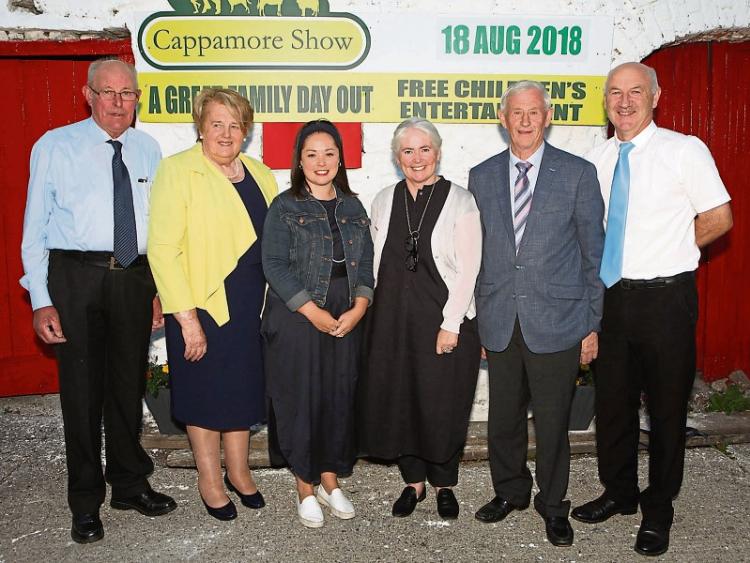 SOMETIMES it takes an outsider looking in to make us appreciate what we have.

The Irish Shows Association president David Sheehan noted that you wouldn’t get the crowd at some shows that you would get at the launch of the Cappamore Show.

Hayes’ function room was packed to capacity last Wednesday night in advance of the day itself on Saturday, August 18 in Ballyvourneen, Cappamore.

Among the large crowd was Sheila Deegan, Limerick City and County Council’s arts officer, who are generously supporting the event. Ms Deegan said it is important to recognise communities that organise an event that has a huge impact.

“There is extraordinary commitment from their committee. They have 120 volunteers – that’s bigger than a small company!” said Ms Deegan, who vowed to dig out her needles and knit an entry for August 18.

This will be the 64th Cappamore Show but despite heading for retirement age they continue to innovate. At the launch, Sinead Toomey and Peter Hanagan, of Music Generation Limerick, really added to the atmosphere.

Paddy Ryan “Luke”, who incredibly has been secretary for 59 of those 64 shows, said Cappamore started, like many shows did, through Macra na Feirme.

“Quite a lot have fallen away sadly. Cappamore has not only survived it has prospered,” said Mr Ryan, who thanked sponsors for their continued support. He says some people ask why go to the bother of organising a show.

“It puts obstacles in the way of communities working for the betterment of their communities. Those authorities would be better off helping communities instead of putting red tape in their way,” said Mr Ryan. Insurance, health and safety regulations and now GDPR are all issues shows have to deal with. He thanked Ballyhoura and Limerick City and County Council who ran courses for committee members.

Marie Hayes, chairperson, said the launch was the traditional “kick-start” to their show day and thanked sponsors, some of whom have been with them for the start.

PJ Blackwell, treasurer, said 25% of their financial support comes from sponsors and without it there would be no show.

“We are not a profit making venture. At best we break even but the moral support of sponsors is as important as the financial support,” said Mr Mr Blackwell. Amid all the honoured guests in Hayes’ was one Jimmy McCarthy. The 86-year-old president of Cappamore Show is the only continuous link by a serving committee member to their very first event.

See more on the Cappamore Show in coming weeks