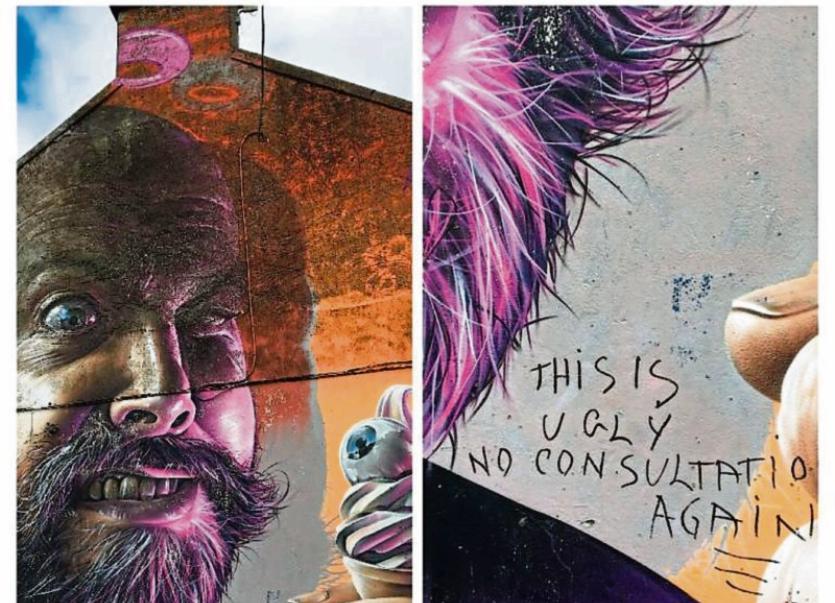 A POPULAR mural near King John’s Castle in Limerick has been vandalised, in a move described as an “absolutely worthless statement”.

Metropolitan district mayor Daniel Butler has called for the person who graffitied the mural of a man enjoying an ice cream near King John’s Castle to cover the full cost of its repair.

He’s hoping closed circuit television can be used to capture the perpetrator, who wrote on the artwork ‘This is ugly, no consultation’.

“It’s just come from a disgruntled idiot. But it’s hard to comprehend what kind of mindset would drive someone to totally compromise a piece of art which is liked and loved by a lot of people in what is an iconic location,” he said.

The mural was unveiled in 2013, and is popular with tourists.

It was also used as a backdrop for the launch of the Going for Gold environmental initiative this year.

They were commissioned by the former Limerick City Council for the Make a move Festival, and were painted by Glasgow-based artist Smug, who is regarded as one of the most accomplished street artists in the world.

Cllr Butler said he’d like to see the person prosecuted for vandalism.

“That’s what it is. It’s a piece of art paid for through the urban graffiti festival. We had an artist come in and do this. The individual should at least be fined. If I had my way, I’d make them cover the entire cost of the repair. I’d just be hoping there’s cameras up there,” the metropolitan mayor added.

When the mural was opened in 2013, it was reported to have sparked controversy in the area.

It opened at the same time as the €6m redevelopment of the castle.

A number of other public art murals followed on from this, including the Goddess of Siona.

The giant mural spread across a gable on Bridge Street is part of an ongoing programme by Limerick City and County Council to enhance the aesthetics around disused city sites.

Council is also seeking to do the same at other sites in the city which are no longer in public use.

Gardai are set to investigate this vandalism, and can be contacted at 061-21400.