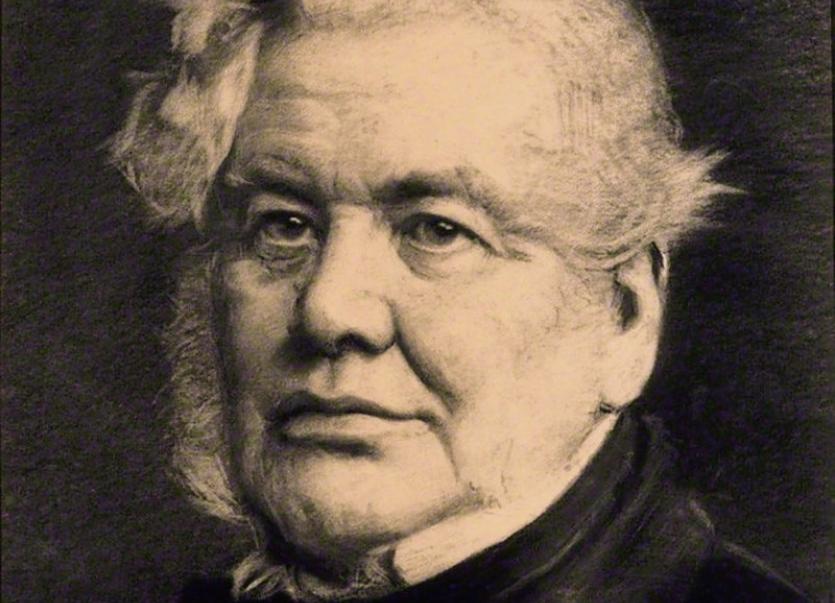 Isaac Butt replaced Francis William Russell as the M.P. for Limerick following the death of Russell in 1871

THE act of slandering your political opponent is not a new phenomenon. In 1865, a case was brought to the Limerick Quarter Sessions, not by the man slandered, but by the bards not paid for performing the slander.

Today, the name of Michael Hogan, the Bard of Thomond, is known throughout the city. His face is inserted into a wall of the Civic Trust building and his statue outside the Castle shows him orating to what would have been a gathered public. Hogan was not the only bard in Limerick during this period. Terence O’Driscoll and Thomas Walsh of Curry Lane were well known poets, who both published and performed ballads on the streets of Limerick for the highest bidder.

During the 1865, elections O’Driscoll and Walsh were hired by Timothy Morrissey of Clare Street to perform ballads to excite the public in favour of the Liberal Francis William Russell and against the Conservative James Spaight and his supporters. Russell was the MP for Limerick from 1852 until his death in 1871.

It is not known if Russell knew of the actions of the elderly clerk who worked in Russell’s Mills on Henry Street. The following report of the case was recorded in the Chronicle on November 2, 1865.

“At the Limerick Quarter Sessions, his Worship, John Leahy, Esq., Q.C., disposed of the civil business. The first case concerned the returning of a Member of Parliament by song. The plaintiff was Terence O’Driscoll, the street bard of Limerick, who composes and sings with native effect his popular ditties. The defendant, Mr Morrissey, is a clerk in the employment of a local flour milling firm.

The action, for £6-6-0, was brought by the plaintiff for being employed by the defendant at the late election to compose and sing street ballads for two of the candidates in order to excite the popular sympathies in their favour, and to influence electors to vote for them.

Terence O’Driscoll, sworn and examined by Mr. [John] Doyle - ‘What profession are you?’

‘I am a poet and singer (laughter), and it was in that capacity I was employed at the late elections to compose and sing street ballads. I entered into an agreement with Mr Morrissey at the Newtown Pery Mill. Six hundred copies of the first song were printed but we would not sing them unless we got our wages. We were humbugged at the last election before that. I told Morrissey that I and my comrade, Walsh, wanted 5/- a day each for singing the songs, and £5 each if the candidates were returned. We sang for 12 days up to the day of the poll.’

Mr Doyle - ‘I have here the manuscripts of the Poets Lament (loud laugher). It begins:

My name is O’Driscoll

A singer by trade;

Myself and my comrade

We never were paid.’

His Worship, after looking at the songs handed up to him for perusal, asked - ‘Did you expect to be paid for exciting animosity, to incite the people in the streets to strike each other and smash each other’s heads?’

Mr Doyle - ‘The fact is, that a couple of ballad singers could do more to raise the mobs than all the speeches that could be uttered.’

Witness - ‘We were able to sing two mobs to smash each other’s skulls.’

Court - ‘I see by the words of your songs that they were of that violent character that they must have led to violence between the mobs, particularly if they were filled with whiskey and porter. There are bad songs that parties are taken up for singing, such as Fenian songs and others that are illegal. You were very fortunate that you were not taken up by the police and sent to gaol for singing those songs.’

Witness - ‘I was promised protection.’

The process was then dismissed.

A By-Election was held on September 20, 1871, following the death of Francis William Russell. Donegal native, Isaac Butt was elected to represent Limerick City, an office he held until his death in 1879. On January 1, 1877, Butt was conferred as an Honorary Freeman of Limerick.

The Chronicle on January 23, 1892 recorded that the “remains of this deeply-lamented gentleman - one off the most useful and representative citizens Limerick has ever had - were interred this morning at St Mary’s Cathedral, amidst the most widespread expression of regret. Quin, we believe, is the family burial place of the Spaight family, but owing to Sir James’s long connection with the city of Limerick, St Mary’s was chosen as his last resting place.”