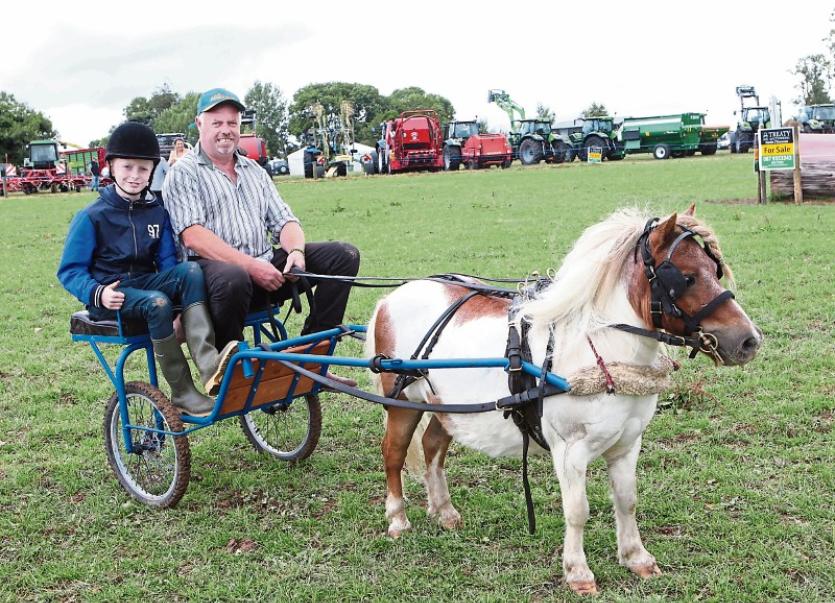 AFTER weeks of unending sunshine and ne’er a drop of rain, the soft showers of early Sunday morning seemed like an affront to a show that had survived a century of wars, recessions and huge social change.

But, as befits a survivor, the Newcastle West Show shrugged off the rain for five or six crucial hours and welcomed the sun when it did make its fitful appearance.

From early morning, as the cattle trailers and horseboxes wound their way to Terence Leonard’s farm at Ballynoe, outside Newcastle West, for many years now the ‘new’ home to the show, the sense of purpose and of atmosphere began to grow.

What might rightly be called the serious side of the show, the many competitions for horses, ponies, hunters, dressage, show jumping  and of course, cattle, swung into action early to cater for all the contestants.  And this year saw a number of new features including the  Retired Racehorse to Riding Horse Working Hunter Qualifier for Tattersalls in August.

From early hours too, the trade and exhibition stands were up and ready to do business. This year, the Limerick Food Experience attracted a lot of visitors, only too happy to taste and buy the salads, tea bracks, apple cake, cheeses and relishes on display and to attend the live cookery demonstrations.  Elsewhere, there were queues for venison burgers or Hungarian wraps and all against the whir of Mike Fogarty’s chainsaws as he sculpted birds, animals and human faces from his rack of six differently sized chainsaws.

“It’s the first time in five years we have had rain at the show,” Liam Ruttle, vice-chairman said. “And while some people were very glad to get rain, and it helped the ground for the horses and ponies,  it did affect our numbers and the crowds were down on last year.”

“This year too, apart from the rain, there was a lot of competition with the Limerick Kilkenny match, the World Cup final and the races in Broadford.”

However, he was pleased that  competitors continued to come from all over Limerick and from around the country. The Ridden Pony Supreme, he pointed out  was won by a competitor from Kildare while the Grand Prix was won by Francis Connors from Waterford.

“Cattle numbers were up and the Hereford show in particular was very good,” Mr Ruttle said. “We are very pleased about that as we had €9,500 in prize money and it is something we have been nurturing along. The sheep numbers too were up and were double those of last year.” Other events such as the dog show and the bonny baby contest went off well while Diana Devin won the Glamorous Granny accolade, Eleanor O’Sullivan won Best Dressed Lady and former councillor Leo Walsh won Best Dressed Man.