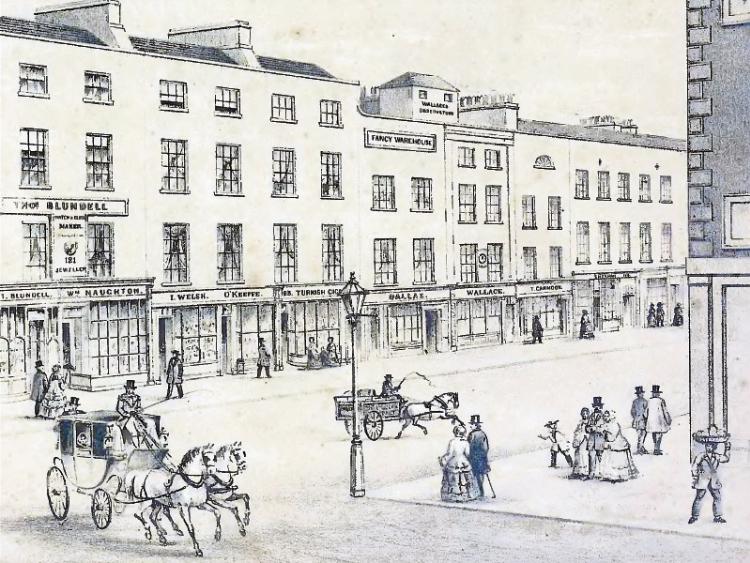 RICHARD Wallace was a silversmith and jeweller in Limerick city from at least 1832 until 1841, when he had a partnership with H Smith.

On June 1, 1841, Wallace opened his new store in George Street (O’Connell Street) where he had an observatory built into the top of his house.

Octavius Wallace was the Secretary of the Limerick Chamber of Commerce from 1892 to 1895. Richard outlived three of his children, Anastasia, William and George.

Despite raising such a large family, Wallace could still afford to feed his hobbies by building his observatory on his building and integrating a clock into the front of his building, which read Tempus Fugit (time flies).

From his observatory, he would gaze at the stars and take daily readings of temperature and air pressure. These readings were often published in the Chronicle in the mid-nineteenth century.

When he heard about Hampden W. Russell’s impending flight on Hampton’s balloon on September 3, 1849, he gave Russell a barometer “for the purpose of getting for him its indication at the greatest altitude” while on board.

Richard and his adult sons were members of the Freemasons, at Lodges No. 73 and No. 333.

Richard passed away on May 21, 1875 at his residence 88 George Street, Limerick. He left his wife Bridget effects of just under £30,000. This would be equal to approximately €15 million today. Bridget was able to live on this sum for almost twenty years.

Following Richard’s death, his jewellery store continued under the guidance of his son John Henry Wallace. The Chronicle of December 5, 1901 noted the death of John Henry.

“We announce with very sincere regret the death which took place at his residence, 17 Barrington Street, last night, of Mr John Henry Wallace, senior member of the firm of Richard Wallace, the oldest established firm of jewellers in the city.

“Mr. Wallace had been confined to his house for only ten days or so, but within the past few days, his illness occasioned the deepest anxiety. His demise at the comparatively early age of 55 years removes from the midst a gentleman who throughout his life displayed the highest ideals of Christianity, and that in most unostentatious manner. His kindliness of heart, and gentle retiring disposition, were well known to all who came in contact with him, either in business or private life, but the extent of his charity and benevolence will probably never be known.

“Mr. Wallace was the eldest surviving son of the late Mr. Richard Wallace, and the representative of a very old and highly esteemed Limerick family. In the early sixties he passed a most brilliant examination for paymaster’s clerk in the Royal Navy, and was stationed for a while on H.M. ship ‘’Ajax’’ at Kingstown.

“He afterwards severed his connection with the navy, and entered into commercial life with his father, succeeding in making the business one of the best in the city. To his widow and family we tender our deepest sympathy in their poignant sorrow.”