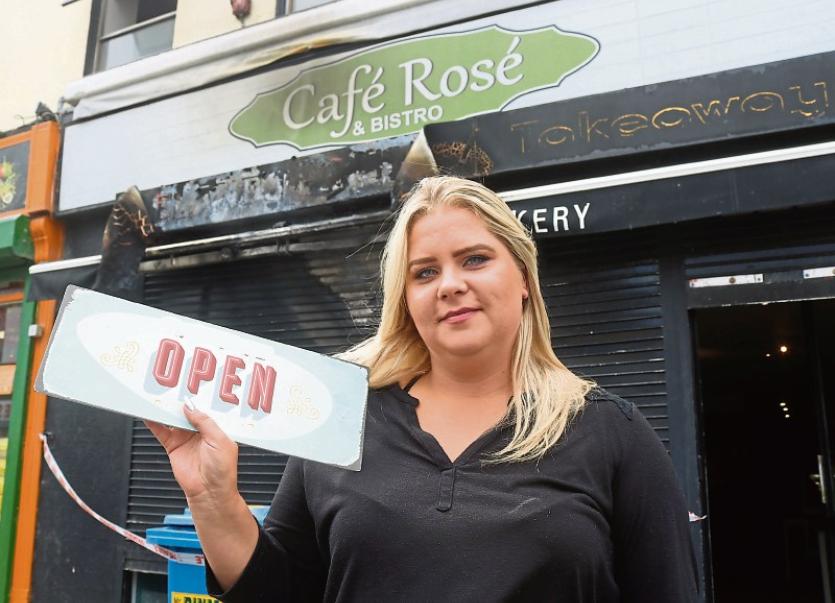 Magdalena Dembicka, owner of Cafe Rose and Bistro, which is closed due to a fire PICTURE: MICHAEL COWHEY

GARDAI probing a restaurant fire in Limerick city centre are not ruling out criminal activity, the Leader has learned.

Emergency services were alerted to a fire at Cafe Rose and Bistro on Roches Street at 12.10am on Thursday.

While gardai cannot confirm the cause of the fire, it is understood that bins were set alight and the smoke and flames spread to the business and the overhead apartments.

Limerick Fire Service dispatched three units to the scene at 12.25am and returned to their Mulgrave Street base at 1.05am.

While there was no smoke or fire damage inside the restaurant, there was significant damage to the front window, shutters and signage. As a result, the restaurant has been forced to shut down until reparations are complete.

Cafe Rose and Bistro owner, Magdalena Dembicka discovered that there was a fire when she arrived at work this morning.

“I couldn’t believe that this was after happening. It is the last thing you want,” said Ms Dembicka who was been running the cafe for nearly three years.

A new window was already fitted in by 12 noon on Thursday.

“We are acting fast. At first I started crying, at first there was a shock. Then I said, we need to look forward, you know? We will throw it all down, shutters and canopy and everything. That will take time as that can’t be done within a day, but hopefully they will get a sign to us tomorrow,” she said.

As part of Limerick Fire Service’s late night operation, a positive pressure ventilation had be applied in order to extract smoke from the overhead residential apartments.

“I heard that it was actually someone who was passing who called for a fire brigade. It wasn’t the people living above. Imagine if they were asleep and something happened to them?” she told the Leader.

In a statement to the Leader, a garda spokesperson said that Henry Street are investigating the circumstances surrounding the fire at the Roches Street business.

“The cause of the fire has not yet been determined and as such a criminal aspect cannot be ruled out. Investigations are continuing and all aspects of the case will be examined,” he said.

Anyone with information is asked to contact Henry Street garda station at 061212400.