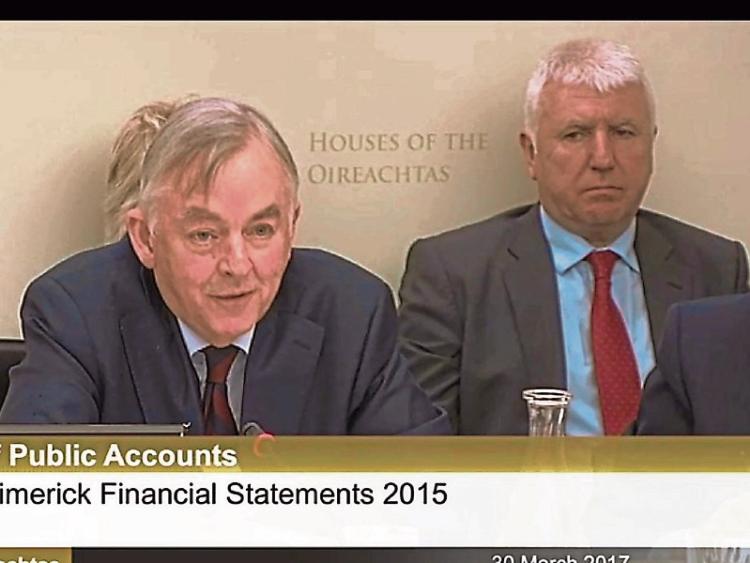 Tommy Foy, right, at the PAC with former UL president Don Barry in 2017

THE FORMER director of human resources at the University of Limerick, who was in charge throughout the period when controversy surrounded the university, has joined a UL subsidiary after he stepped down last week, the Limerick Leader understands.

The Limerick Leader understands that Mr Foy has since joined UL subsidiary, UniJobs.

A source has also confirmed that no financial agreement or settlement was made with Mr Foy before he stepped down from the role of HR director.

When asked if Mr Foy had been retained or redeployed, a UL spokesperson said: “UL has a policy of not commenting on staff’s individual personal matters. However, UL can confirm reports that the HR director has stepped down, effective last Friday.”

During Mr Foy’s time as HR director, numerous revelations against the University of Limerick were brought to light, beginning with the suspension of two whistleblowers from the finance department.

This was first revealed by the Limerick Leader in 2015.

These payments are the subject of a report by the Comptroller and Auditor General which is believed to be imminent.

A confidential audit carried out by Deloitte found that “inaccurate” and “incomplete” information was provided to the Public Accounts Committee, the Department of Education, the C&AG, RTE and UL’s own legal advisers.

The Deloitte report also stated that Mr Foy was found to have provided “inaccurate” or “incom plete”  information to the C&AG on four occasions.

An RTE Investigates programme last year revealed that UL paid almost $100,000 for the online doctorates of two senior HR managers, including Mr Foy, from a private college in the United States. UL also paid for their flights and hotels to attend a hooding ceremony in Florida.

In a circular issued to colleagues, Dr Fitzgerald thanked Mr Foy for “his service to the University and to wish him every success in the future.”

“Mr Michael Kelly will be Interim HR director and will join the executive committee in this capacity.” UL is due to shortly complete a review of HR structures and processes, he added.