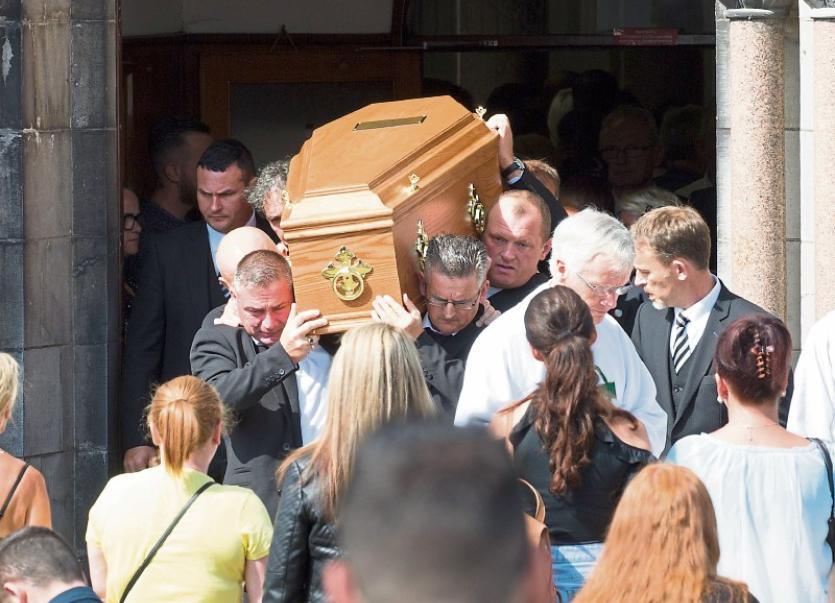 “A TRAIL of devastation” has been left behind for the heartbroken family of murder victim Patrick ‘Pa’ O’Connor who was laid to rest on Friday morning.

Patrick, aged 24, from Kileely, was stabbed to death by another man while socialising at his local pub Fitzgerald’s Bar on Sexton Street North, Thomondgate, on the night of July 7.

The Pallas Foods employee was laid to rest at Mount St Oliver cemetery following a Requiem Mass at St Munchin’s Church on Friday.

Leading the Mass, Fr Donal McNamara said the brutal killing of young Patrick was “futile, meaningless and heartbreaking” for those left behind, and it has left “a trail of devastation” for the O’Connor family.

“Pa has lost is life, his parents and sisters and extended family are lost, the proprietors of Fitzgerald’s pub—a delightful and supportive family in the parish, whose premises have been tarnished by this brutal killing—have been left devastated. Also the family of the alleged murderer, the parish and indeed the city, once again, has been numbed.”

He added that the murder was “unfair, cruel and mind-boggling”.

This was the second funeral Mass of a murder victim that Fr Donal McNamara led in just under seven months. It was the second murder in the parish since widowed pensioner Rose Hanrahan was brutally killed in her home on New Road.

“On occasions like this, I always find it so difficult to speak. Pa was too young to go, he had a lot of living to do, places to go and people to meet, friendships to make and things to do. And yet it has all been cut short.

“You know, before Christmas last, we had a similar funeral experience here in this parish and that was of the late Rose Hanrahan, who died under similar circumstances. She was brutally murdered. Then as is now, families, the parish, in fact, the city is left in turmoil because of a brutal act of violence of individuals,” Fr McNamara said.

He said that his parents Michael and Jackie took a keen interest in Patrick’s education, who attended JFK Memorial School on the Ennis Road and Ardscoil Ris.

“Pa was loved by all and no one disliked him. As his mother said, he was a loveable rogue. Always the messer and in the most traumatic situations, he always had a way of making you laugh when possibly you were at your lowest.”

Fr McNamara said that because he was the only son, he was “totally spoilt”.

“He was a big Liverpool supporter and has been for years, he loved to socialise with the lads and have the pint or two and where he may have had his arguments and disagreements with others, he never held grudges.”

He added that there has been huge outpouring of support from the Kileely and Thomondgate community for the O’Connor family.

“I had the opportunity to comment to Pa’s family how amazing the whole family has been during this horrendous ordeal, but they have been surrounded by such good people. Yes, it’s at such times that a strong community comes into its own.

At a joint policing committee, held at City Hall this Friday morning, Cllr Sean Lynch expressed his sympathies to O’Connor family and wished the gardai the best of luck with their investigations.

Mark Crawford, aged 41, of Distillery View, Thomondgate has been charged with the murder of Patrick O’Connor and has been remanded in custody until next Tuesday.