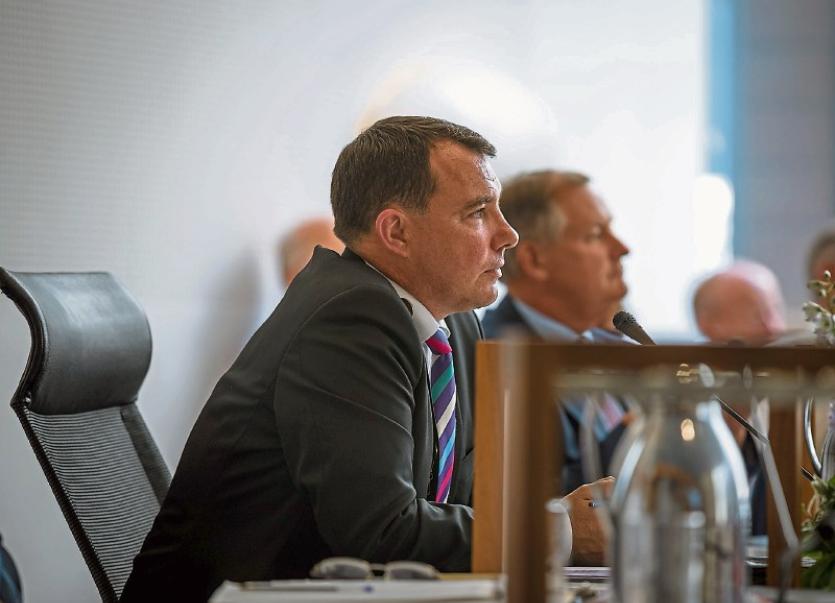 And he has set his sights on delivering “a Limerick that works for everyone” after being elected mayor.

The City West Fianna Fail councillor saw off the challenge of Labour member Elena Secas to secure the title of City and County mayor.

”It’s a great honour to be elected mayor,” he told the chamber upon taking the chain of office. “As a schoolboy I used to wait for the bus at the end of this street [Dooradoyle Road, where the council is based]. But I never imagined some day I’d be elected mayor.”

The father-of-four’s elevation to the mayoralty comes as part of a Fianna Fail-Fine Gael pact, drawn up in 2014, to share the top council positions among the two biggest parties on council.

He was nominated for the role by his cousin Michael Collins – who himself was elected deputy mayor.

And he was seconded by his party colleague in the city Kieran O’Hanlon.

“Limerick’s future looks bright. But, now is the time for the next set of big ideas. We need to generate 3,000 jobs every year. Not everyone is feeling the recovery, and we still have a lot of social deprivation, so we know there are many challenges ahead, but we also have a lot to be positive about.”

He challenged the Limerick public to think about the next big idea which would “add to life in Limerick”.

”We need to think big about the next Troy Studio-type project, or the next concert, civic or cultural event. The citizens have already shown through their engagement with Liveable Limerick, and that they have lots of ideas for enhancing Limerick life. Limerick is changing and we have to plan for the 50% increase in population projected for Limerick by 2040,” Cllr Collins, who runs Collins Bar in Dooradoyle, said.

He was also joined at the mayor-making ceremony by other relatives including former TD Michael Collins and ex-MEP Gerard Collins.

“In the past 12 months, Limerick has experienced an economic renewal with strong inward and indigenous investment. We have seen strong and continued job creation, with a number of companies setting up or expanding in Limerick. We have seen the steady decline in the unemployment rate which has given people across our city and county the opportunity to return to meaningful employment,” he said.

Cllr Keary of Croagh also commissioned a special lapel pin for all 40 councillors, as “a special symbol of the contribution that has been made over many years by the selfless work on behalf of the people of Limerick.”

She was nominated for the role as mayor by her Labour colleague Joe Leddin, seconded by Sinn Fein’s Malachy McCreesh.

Her nomination was backed by Sinn Fein, and Independent councillors John Gilligan and Lisa-Marie Sheehy.