Stone the Limerick crows! Noisy birds cause consternation for sleepers 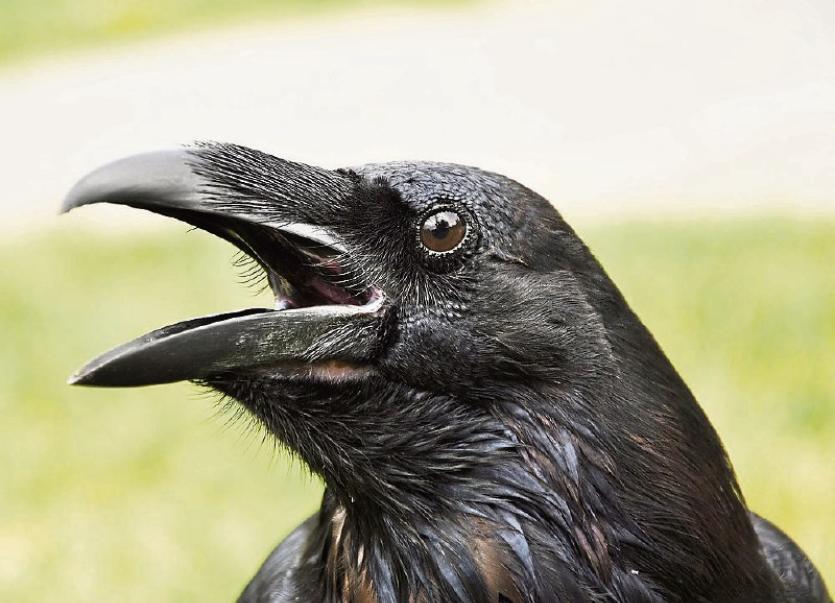 Cawing crows are waking up the county and even scaring calves

IT IS HARD enough to get some shut eye during the heatwave but cawing crows are playing havoc with sleep patterns of those living in the county.

During a presentation on a draft noise action plan at the most recent meeting of the Cappamore-Kilmallock municipal district, Cllr Eddie Ryan took aim at the belligerent birds.

“There is an epidemic of crows. They’re everywhere. The population of crows hasn’t just doubled, it has tripled. They start cawing every morning at 4am,” said Cllr Ryan. It isn’t a dawn chorus that he or those that he represents appreciate.

“They are all over my area [Galbally]. Every morning they start up at 4am. One woman came home from England to live with her mother. She said she was woken by them at 4am every morning for two weeks and couldn’t get back to sleep. She actually forgot about it but they’re still there and we’re not getting used to it,” said Cllr Ryan.

Locals even got in teleporters to take down nests it has gotten so bad, he said. As well as waking up peacefully sleeping souls, Cllr Ryan said crows are even scaring calves.

“I’ve seen a flock of them fly low over young calves in fields to move them away from troughs. They then eat the nuts in the troughs. They are able to boss the calves. I’ve seen magpies peck calves to get then away from the nuts but not crows – they’re not that brazen,” said Cllr Ryan.

The newly elected cathaoirleach of Cappamore-Kilmallock municipal district said as well as noise population the crows are damaging precious bales of silage.

“One year I had 156 bales and everyone of them had to be repaired from crows pecking at them. They are vermin that are destroying fodder. They are a nuisance,” said Clllr Ryan.

Moving from crows to canines, Cllrs Gerald Mitchell and Mike Donegan said they had both received complaints from people whose neighbours’ dogs were barking incessantly.

In his presentation on the noise action plan, Kieran Lehane, director of service, said undue noise has adverse health implications. Only noise from major roads is considered in the draft noise action plan.

Mr Lehane said a lot of complaints are beginning to arise from Monaleen, Annacotty and Dooradoyle due to the increasing volumes of traffic on the M7 and M20. As part of his research he said he had visited a number of locations around the edges of the city.

“It was shocking to hear it. Continuous noise is proven to be stressful and heighten blood pressure,” said Mr Lehane.

In areas close to high level noise, he said the council will ask builders to provide noise mitigation measures as part of the process of going for planning.

“There are a wide range of different measures. They include building barriers, designing schemes facing away from roads, secondary windows to protect from noise.

”As much as possible we will be trying to facilitate development but we have to protect residents,” said Mr Lehane, who added that Limerick City and County Council is lucky to have on its staff “one of the foremost experts on noise in the country” – Dr Simon Jennings.

“Every five minutes this thunderbolt comes from a truck. It is of ongoing concern. It is not getting any better,” said Cllr O’Donnell.

Other concerns raised by councillors were construction work late at night, manhole covers rattling and the sound of cars going over ramps in housing estates.

”It is a slightly different issue but no less valid,” said Mr Lehane.