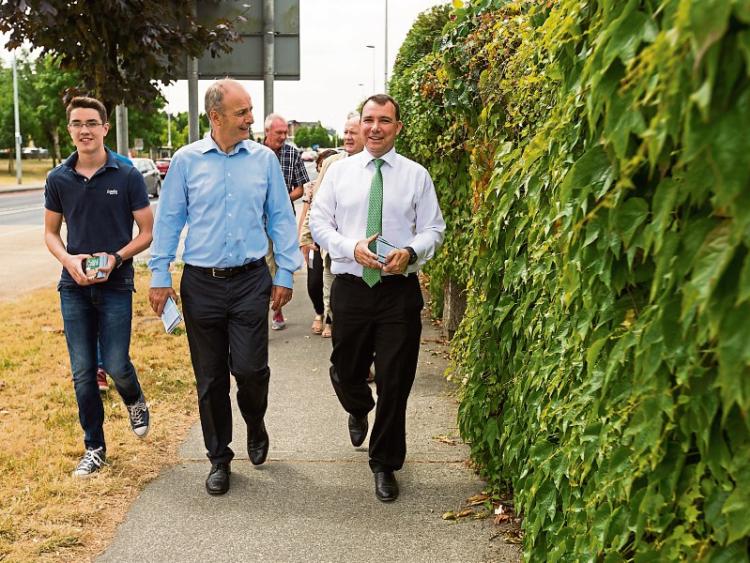 Mr Martin was in Limerick this Thursday to canvass alongside Mayor James Collins, who is hoping to recapture the second Fianna Fail seat in the city constituency.

He said the new mayor is a “very able performer”, and he will have a “difficult problem” in terms of who to put on his front bench should Niall Collins, Willie O’Dea and Cllr Collins all be elected.

On housing, Mr Martin said: “We need to trust local authorities to deliver homes. That has risks, I acknowledge. But we need to get building. People seem to be carrying on with policies as if there is no crisis. But there is a real crisis out there at all levels, and its affecting people socially how they live, their quality of life. A lot of young people going into a job these days, 40% of their income can go on rent. If we accept it’s a crisis, we need to take policy initiatives.”

Watch as FF Leader @MichealMartinTD says during a visit to Gardens International with Mayor of the City and County of Limerick @jamesjcollins that Limerick Twenty Thirty could be a model for other parts of the country. #limerick #development @LimerickCouncil pic.twitter.com/R60rUugqCQ

One of these, the opposition leader said is to look at state-owned land to develop housing which is affordable for people.

Mayor Collins said: “It’s something we are trying to do in Mungret. We’re masterplanning that, and a portion of it will be affordable.”

On the cost issue, he said: “What we find is the people who are renting cannot buy, as they are chasing the market all the time, house prices are going up, and they can’t actually raise a large enough deposit to even qualify for these schemes. You are caught in a vicious loop with the prices rising and rents also rising.”

Mr Martin said Mayor Collins, if elected, “will have a very significant impact on the national stage”.

“Suffice to say, there is a very high calibre coming out of Limerick. In the event of we doing well in the next election, I’d have a very difficult problem – but a welcome one. James is very able and brings a lot of ability and quality to the table.”

Mr Martin said he does not anticipate a general election by September, adding“a lot will depend on the next budget.” This will be announced in October.