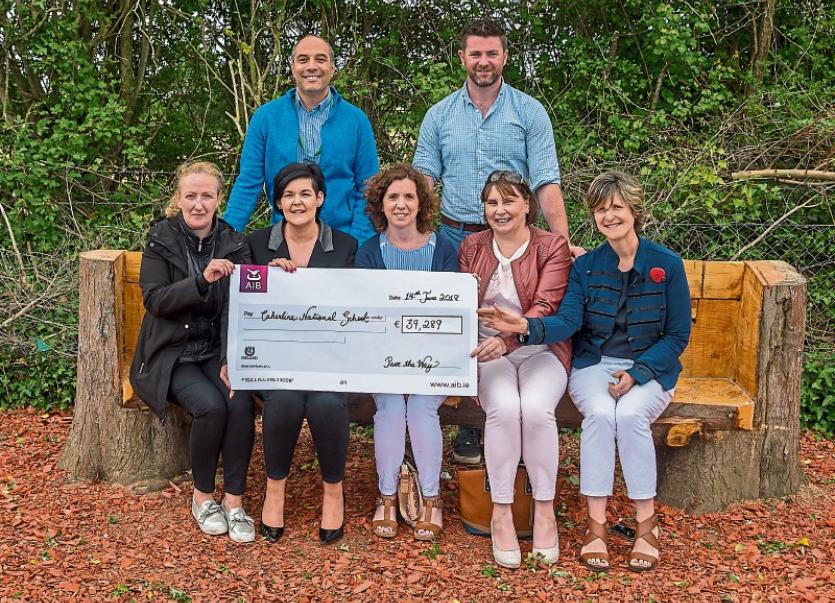 Smiling Caherline NS parents association and principals with the cheque

WHEN Caherline NS announced plans in April to raise €20,000 in just eight weeks to buy land, there were a few raised eyebrows.

It would be an incredible achievement to amass that amount in such a short timeframe. But now eyebrows are raised even further as they doubled it!

Due to the generosity of a farming family, Caherline NS were given a once in a lifetime opportunity to expand. To raise the €20,000 to buy neighbouring land by June they launched a fundraiser called Help us Pave the Way. They appealed to past, current and future families, former pupils, local community, and people living near and far away to support them in this endeavour. A mainstream classroom, pitch, garden, expanded car-park, improved sewerage system and more are planned for the extra land.

Michael McCarthy, principal, said it was a one-off opportunity, which came about thanks to the generosity of a local farming family, who are willing to sell land to the school for a most reasonable price.

“This family have described how they would be proud in the knowledge that future generations of our pupils would benefit from the purchase of this land. On behalf of Caherline NS and our community I would like to sincerely thank them for their generosity,” said Mr McCarthy. The school and its supporters grasped this one-off opportunity with both hands.

Help us Pave the Way allowed people to buy a brick inscribed with their name, or a particular message. These bricks will form part of a footpath. The response was overwhelming with close on €40,000 raised.

“Sincere thanks to all that supported our fundraiser. Clearly the community spirit in Caherline/Caherconlish is incredibly strong. Following just eight weeks of fundraising, we could never have forecast the level of generosity and support we received. Such a successful fundraising event could not have been possible without the hard work of so many of our parents association members. These members worked tirelessly to spread the word. We really appreciate their dedication and hard work,” said Mr McCarthy, who sincerely thanked their chairperson, Suzie O’Kelly.

“Suzie was instrumental in ensuring the success of our fundraiser. The idea was brought to the school by Suzie initially and she primarily co-ordinated the fundraiser. Well done to Suzie and to our parents. We would particularly like to thank our parents, staff, past pupils, community members, anonymous supporters, businesses and those outside our community that supported our appeal. Your support will be remembered for years to come. Your donations will make a very real difference to the girls and boys of Caherline NS. Together we have achieved something wonderful,” said Mr McCarthy.