'A fantastic achievement' as Newcastle West gears up for centenary show 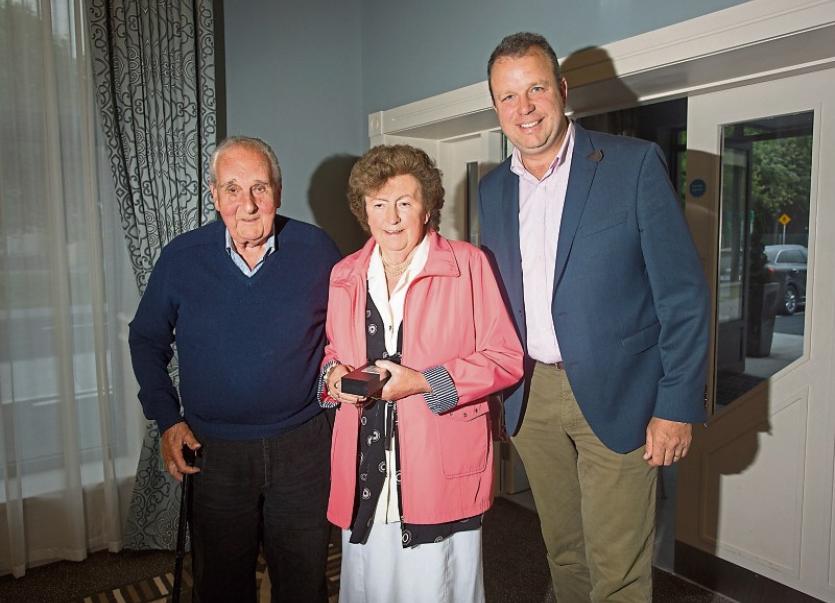 Ned Lynch and Mary McCarthy, who were honoured for their long commitment to the show, with show vice-chairman Liam Ruttle

NEWCASTLE West Show will mark its 100th anniversary this year when the event takes place on Sunday, July 15.

And the organisers are hoping it will be a bumper affair, outstripping last year’s big attendance of 2,000 people.

“We are working hard to return to the heyday of the show when, in 1954, there were 4,000 in attendance with 1,500 entries,” PRO Griselda Williams told the big crowd which turned up at the official launch of the show at the Longcourt House Hotel recently.

A number of new events have been added to this year’s programme including  a special class for ex-racehorses and a Hound Class. Carriage-driving, which featured on the programme in 1918, will also be back on the day’s agenda.

The committee is also hoping to boost numbers in the cattle section, thanks to increased sponsorship.

There will be a big emphasis on artisan food through the Limerick Food Experience, with award-winning chef Tom Flavin from the Limerick Strand Hotel ready to show his skill. Chowder champion Danny Doyle will also add a little Spanish-Irish zest to the proceedings.

“It is a fantastic achievement for any voluntary or community organisation to keep the show on the road for so long,” Minister of State, Patrick O’Donovan said when he officially launched the show. And he appealed for people, particularly new groups of people to support it.

“These events will only sustain themselves if people turn up,” he said.

Ronan Madigan, president of Newcastle West Chamber of Commerce, reminded the gathering that the Newcastle West show was older than the National Ploughing Championships.

“Shows are good for business in the town and in the surrounding area,” he said.

Memories and recollections are running deep and swift as Newcastle West prepares for the centenary show.

It has come as a bit of a surprise to the present committee to find themselves celebrating 100 years, Griselda Williams admitted to the packed gathering.

“Last year we thought this year we would be celebrating our 90th this year,” she said.

But a gentleman walked into the showgrounds last year with a copy of the poster advertising the 1918 Newcastle West Show.

“It is a great achievement and I’d like to acknowledge and pay tribute to members of this community who have supported this show as committee members, volunteers, sponsors and participants for the past one hundred years. Without you, this show wouldn’t still be here today, and thriving the way it is.

And on behalf of the committee, she paid particular tribute to Ned Lynch and Mary McCarthy who between them had clocked up 100 years “tirelessly working” for the show.

“The show has changed a little bit over the years,” Ms Williams continued.

Butter, bacon, housewifery, dead poultry, all of which are listed in the 1918 programme, no longer feature. But she welcomed the return of carriage-riding to this year’s show and a link with 1918.

She recalled the heady days of the 1950s, when entries topped the 1,500 mark and attendance topped 4,000, making it one of the biggest shows in the country.

“In 2018, our committee is working hard to return to the heyday involving the town more closely with the show,” Ms Williams said.

In a delightful trip down memory lane, Michael Healy described his childhood days when he and his siblings became “honorary assistant secretaries” for the show under the watchful eye of their father, the honorary secretary.

Then, he recalled, the show spread throughout the town: to the demesne, to Market Yard, and to the Vocational School. There were exhibition matches, Fossett’s Circus set up in Brouder’s Field, the carnival came to town and a Gala Show Dance was held in Nash’s Ballroom, he recalled.

It was, he said, a real Harvest Festival.

Patrick O’Donovan also dipped into history, and the tumultuous events of 1918, when he spoke at the launch, noting that conditions in the country were in stark contrast to where Ireland is today.

Horse and Pony Showing, Show jumping, Working Hunter and Dressage continue to be the backbone of the show but this year sees the introduction of  a Retired Racehorse to Riding Horse Working Hunter Qualifier for Tattersalls in August. Another new feature is a Hound Show and prize money for the cattle showing is up.

Agriculture will include sheep, goats, donkeys, miniature ponies, and poultry and the family day out will include merry go rounds, bouncy castles, a dog show, bonny baby, a  glamorous granny more.

The West Limerick Vintage Club returns as does Zoltan the Hun for his daredevil display of horseback archery, axe and spear throwing and there will be live music, food and bar as well as lots of trade stands.