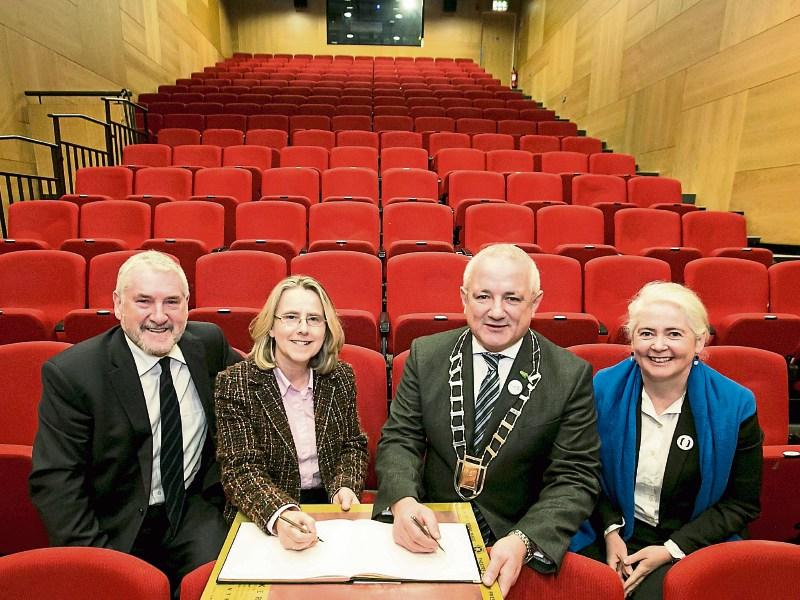 THE next 12 months will see a big lead in to the local elections of 2019. The campaign will no doubt feature individuals of whom we have heard little over the past few years making broad statements as to how they intend to solve various problems across Limerick.

In fact, it has already started. Last week former Councillor Tom Shortt announced that he would be calling for “Limerick workers not to be passed over for work at Troy Film Studios and for the Belltable to be reinstated as a fully independent Arts Centre” during the opening session of a Labour Party Summer school held in the city at the weekend.

Mr Shortt’s intended speaking subjects, sent out by the Labour Party to media, gave the impression that he has been living under a rock since losing his seat on the local council back in 2014.

In fact, we would argue, two of the more celebrated success stories of recent years in Limerick have been that of both Troy and the resurgent Belltable.

Troy Studios, a tangible legacy of our year as City of Culture, has been successfully developed as one of Ireland’s most state-of-the-art film production facilities. Who would have thought four years ago that the city would be home to a major US production of a TV series written by the creator of Game of Thrones?

More importantly, Mr Shortt seemed to be unaware of the many Limerick people who have found regular employment across many different disciplines at the studio.

Technicians, carpenters, production team, catering and set construction are just some of filming requirements that have employed Limerick people since the studio kicked into action. Troy has committed to creating a local workforce to crew its productions.

The Engine, located in the former Dominican building on Cecil Street, was established by the local authority last year. One of its briefs has been to create a supply of skills to meet the needs of the international film sector following the location of Troy in Limerick. By partnering with the film and tech sectors, it is ensuring that the training provided is tailored to the skills needs of the sector.

Troy Studios has just completed production on the first series of George RR Martin’s Nightflyers. There are further series to come. With these series will come further training and upskilling for any Limerick people who have an interest in working at Troy.

Troy, I am certain, are only delighted to employ local people and have actively publicised the many local success stories that have been allowed to flourish at the studio over the past 18 months.

Mr Shortt’s second reference related to the Belltable on O’Connell Street. We won’t delve too much into the past but let’s just say that when the Belltable was forced to close its doors in 2012 its financial affairs were chaotic.

After a few years in the black, the Belltable was finally returned to the people of Limerick as a valued arts centre when The Lime Tree Theatre signed a lease with the local authority to run the facility.

The deal wasn’t just a saving grace. It was inspired. Since taking over the running of the Belltable, the Lime Tree team have enabled the Belltable to thrive as a city arts venue.

The Belltable’s output is now better than ever. Local, national and international theatre regular fills its stage.

Its focus on children’s theatre and events has gained recognition. It’s film nights (working in collaboration with the IFI in Dublin) is extremely popular. Its café is shortly to see a relaunch.

The Belltable:Connect initiative was introduced to support the professional development of theatre artists in Limerick and has been providing rehearsal spaces, workshops and mentorship programmes to young practitioners over the past number of years.

The programme manager at the Belltable is Marketa Dowling, an individual who is held in the highest of respect amongst the arts community in the city. She is renowned for having a vision and, importantly, a great ability to deliver that vision.

Simply put, the Belltable is in the best health it has been for many years and long may it continue.

Tom Shortt is entirely welcome to speak about the Arts as a Vehicle for Change, the main theme for his talk at the Summer School, but sweeping statements about Troy and the Belltable, two success stories of recent years, are less so.

There was certainly a sense that this was the beginning of his 2019 local election pitch. Thankfully, his comments were picked up on. Thankfully, members of the arts community in Limerick clarified things for Mr Shortt.

As we enter 12 months of what will be a frantic period of political hopefuls begging us for their votes may I ask this of all potential candidates – please educate yourself on the realities; please find the real issues that need addressing in the city; please engage intelligently and please don’t make broad sweeping statements without first thinking before you speak out.