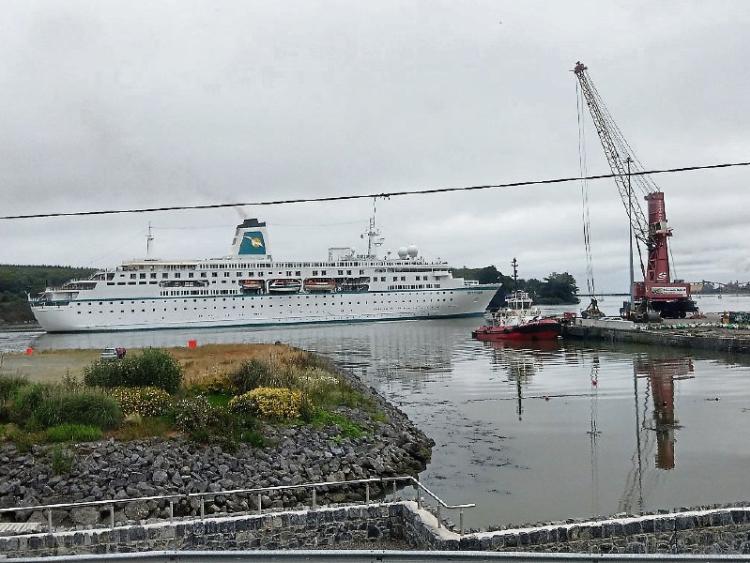 The MS Deutscland’s arrival in Foynes on Monday morning was a talking point in the local area. The ship is decorated in the style of the 1920s

TOURISM in west Limerick experienced an unexpected boost this week, when a cruise ship carrying 500 people arrived at Foynes Port.

The MS Deutschland, a luxurious cruise liner decorated in the style of the roaring ‘20s, was destined for Galway but was forced to divert to Foynes at short notice due to weather conditions.

The ship, which carries over 500 passengers and nearly 300 crew members, was on a voyage from Germany around the UK and Ireland, and had planned stops in Donegal, Galway and Cork.

But it is believed that weather conditions prevented docking at Galway, and the high-end ship ended up in Foynes on Monday morning.

Margaret O’Shaughnessy, director of the Foynes Flying Boat and Maritime Museum, said that the visitors’ arrival was an unexpected boost.

“We were very busy, because it was so short-notice that we weren’t ready for them. It was great, they were very nice,” said Ms O’Shaughnessy.

“It’s great to get them in. Bus loads of them went off to Bunratty and the Cliffs of Moher and on to the city. We had lots of them come in here to the museum,” she said.

And it seems Limerick Walking Tours, in the city, had a boost too, tweeting: “It was great to see so many of the cruise passengers around town.”

The MS Deutschland is a well-known vessel, having been the set for a German television show called Das Traumschiff (The Dream Ship).

The show, which became one of the most watched programmes in Germany after it started in the 1980s, was filmed on board for fifteen years.

It was a soap opera that saw the luxury cruise travel all around the world.