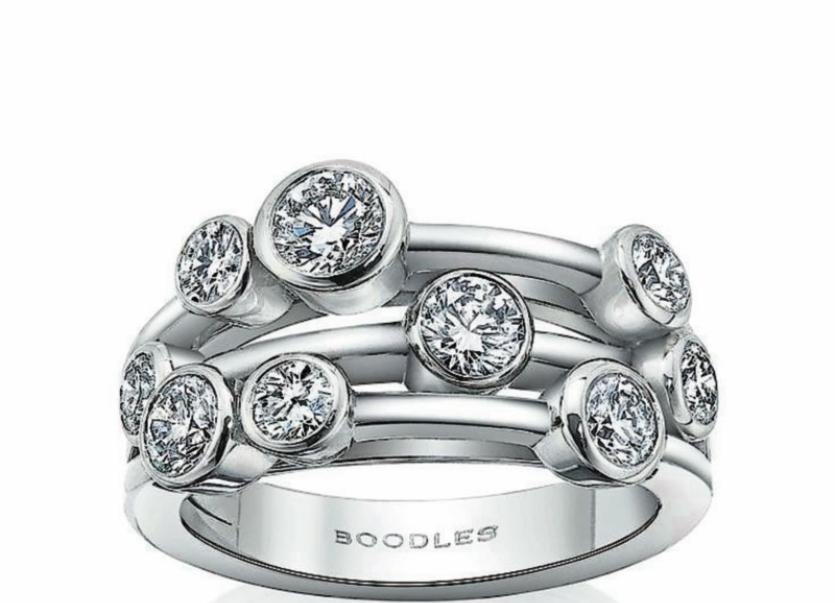 Judge Marian O’Leary was told the designer ring, similar to the one pictured, was recovered by gardai

AN 18-carat gold diamond ring worth €10,000 was sold at a cash-for-gold store for just €72 less than a forthnight after it had been stolen, a court in Limerick has heard.

Judge Marian O’Leary was told the designer ring was recovered by gardai who attended at the premises in the city centre more than a week after it was taken during a burglary near Lisnagry.

Ross Cantillon, aged 35, who has an address at Abbeyvale, Corbally pleaded guilty, at Limerick District Court, to handling the stolen ring at Jonnie Cash, Parnell Street, Limerick on May 28, 2016.

The nine-diamond 18-carat gold ring was from the Boodles Raindance collection.

Cantillon was not charged in relation to the break-in and no evidence was given during the hearing as how he came to be in possession of the ring.

Solicitor Sarah Ryan said her client had received just €72 for the ring, which was recovered by gardai and identified by its owner.

She said the defendant has suffered from severe addiction difficulties in the past and that most of his previous convictions relate to his drug use.

A probation report confirmed he is making efforts to address his addiction and is doing well.

Solicitor John Herbert, who represented Cantillon in relation to separate matters, said he was homeless until recently but has now secured his own accommodation with the assistance of Focus Ireland.

“He was living on the streets but things have settled down,” he said adding he is going in the “right direction”.

Noting that the stolen ring had been recovered by gardai, and that the defendant has not been in trouble in recent times, Judge O’Leary imposed a four month prison sentence which she suspended for two years.

A separate suspended sentence was imposed in relation to a drink-driving offence.