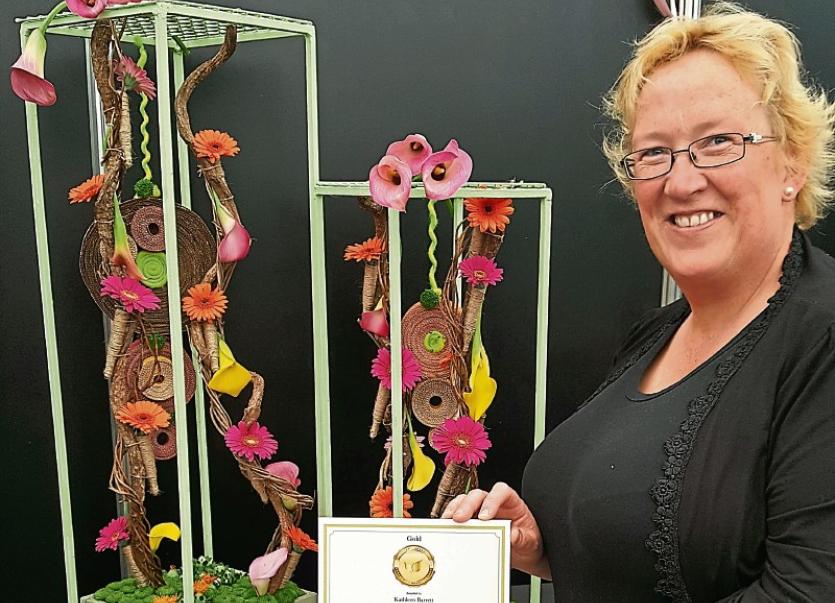 Kathleen Barrett, Athea and her floral art creation A Rich Summer Tapestry which won a gold medal at Bloom

COUNTY LIMERICK floral artist Kathleen Barrett has a golden touch when it comes to flowers and it has won her a much coveted gold medal at Bloom.

It is only the second time that Kathleen, Athea, has attended the festival but each time her artistry and her creativity have won her top plaudits.

Last year, she won Silver Gilt, which is just a half-step away from gold. But the weekend saw her strike gold.

“It came as a surprise,” Kathleen admits modestly. At Bloom level, she explained, everything has to be 100%. “The flowers have to be pristine, the arrangement has to be pristine. If there was even a chip on your frame, you would be down graded.”

But to her great delight and satisfaction, the judges awarded her a full 100%  for her creation, A Rich Summer Tapestry, a design which aimed to be eye-catching and vibrantly colourful.

“Normally I do traditional styles, and this was my first time entering a contemporary design,” admitted Kathleen who started her green-fingered life as a horticulturalist, then ran her own garden centre and now teaches horticulture and gardening skills with the Kerry Education and Training Board

For the past number of years, she has also turned her attention to floral art and is largely self-taught although she has now completed the Advanced Floral Art Course run by the Irish Organisation of Floral Artists.

“It is hard work and is not the same as floristry, “she explained about her floral art.

Her design for this year’s Bloom, using pink and yellow gerberas, stood at almost three feet high. Having competed for the first time with such great success last year, Kathleen applied again in February for this year’s festival but only knew which theme she had been assigned a few weeks ago.

By last Wednesday, she had settled on her design and even had a dry-run before boxing everything up and heading for the Phoenix Park, where she had three hours to make her design a reality. Happily, she did well on time and happily too had no mishaps.

Then on Thursday came the golden-edged news of her medal.

But she is not resting on her laurels. Another competition in another festival beckons.