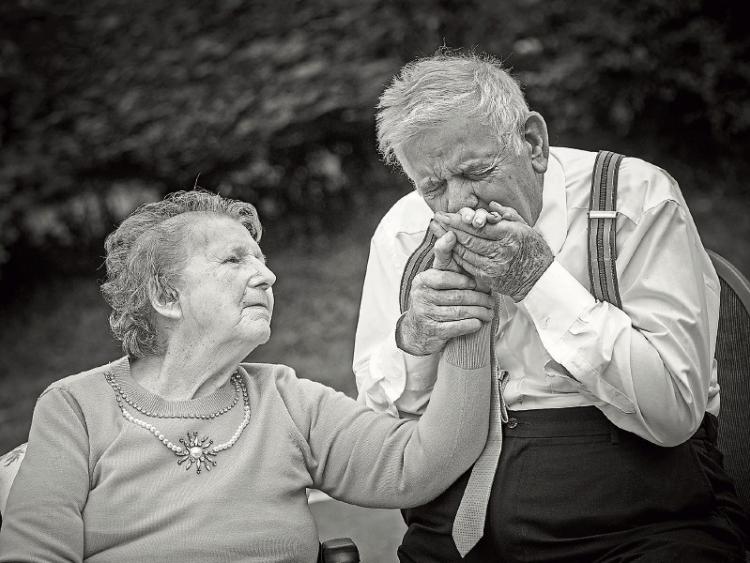 Still crazy (about you) after all the years: Han and Tomás Geoghegan Picture: Bridie Murphy

IT was a romance which began at a local well in West Limerick but it has lasted a lifetime. And last weekend, childhood sweethearts Tomás and Han Geoghegan celebrated their 70th wedding anniversary.

And to this day, Tomás remembers his curly-headed bride with great joy and love.

“I said to her, we will get married so, and she said yes,” he recalled of his proposal and his delight that it was, at last, all settled.

The wedding, he continued, took place in Ballyhahill, Han’s parish and just over the border from his own townland of Turraree in Glin. Afterwards, they had their wedding breakfast in Shanagolden and stayed on there for four or five days of honeymoon before starting their new life together on his family farm.

“We never had a row,” Tomás explained. And they always said the rosary together every night before bed, he added.

But he still remembers how it all began. Han’s people, who were Reidys in the nearby townland of Knockdown, had land close to a well located on Geoghegans’ farm.

“She used to come down there and I would go down to meet her,” Tomás recalled.

“Her mother always liked me. That was a big plus.”

Later, when Tomás was resisting going to Dore’s secondary school in Glin, his mother turned to  Han’s mother in a bid to get Han to persuade him to stay on. The plan worked. Han used to call in for Tomás, he put the bag of books on his back  and off down the road they would go together.

“There would be carts all lined up for the creamery and they used to be all making game of us,” Tomás recalled. “But I took no notice.”

For a while, Han moved away to begin a nursing career but family illness brought her home, and back to her young admirer. In 1947, when the two were just 18 and 19 years old, Tomás finally settled the question between them and their future life together was set in train.

“It is a long time,” Tomás remarked of their 70 year marriage. And a lot has changed in the meantime.

“We had no electricity then and no washing machines. Everything had to be done by hand, even the milking. There were no cars going the road at all that time,” he recalled, adding that for a while, he ran his own hackney business while Han presided over the small shop they ran next door to the creamery as well as rearing their three children.

There were no foreign holidays either, just trips three or four times a year to Han’s sister in Dublin.

Now, thanks to family support, Tomás and Han still live in their home, still together after 70 years.

Their children, grand-children and great grandchildren, along with neighbours and friends all gathered there last Sunday to celebrate their landmark anniversary although, as son Pat joked: “It was impossible to get a 70th anniversary card.”