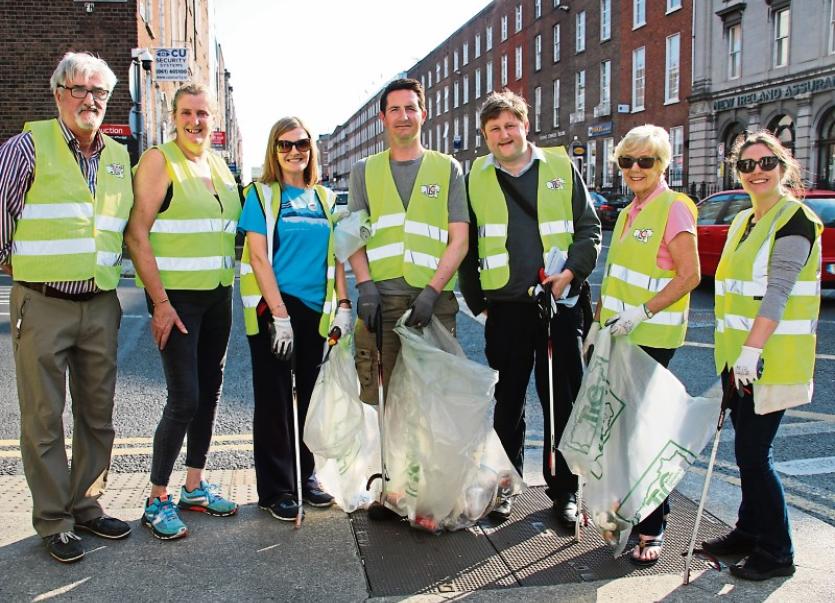 TWICE a week, a small army of wonderfully civic-minded volunteers take to Limerick city’s streets to give them a much-needed tidy-up.

Over the past few years, Limerick City Tidy Towns have dragged the urban area kicking and screaming up the rankings of the National Tidy Towns chart.

Each week during the summer months, this reporter has seen the yellow-vest clad group gathering outside the White House pub at 6pm (the Sunday meeting point is Thomas Street).

And each week, I’ve felt slightly guilty for heading into the pub for a post-work pint, rather than joining them.

But this week, I ditched the draught, and instead linked-up with the litter pickers.

“Ye’d better wear some sunblock,” one colleague told me as I was heading towards the door of our office in the heart of O’Connell Street, in reference to the blazing hot sunshine.

Upon seeing me, Helen O’Donnell, chair of the Limerick Tidy Towns committee beckons me, telling me: “Come on, Nick, you’re in our group tonight.” 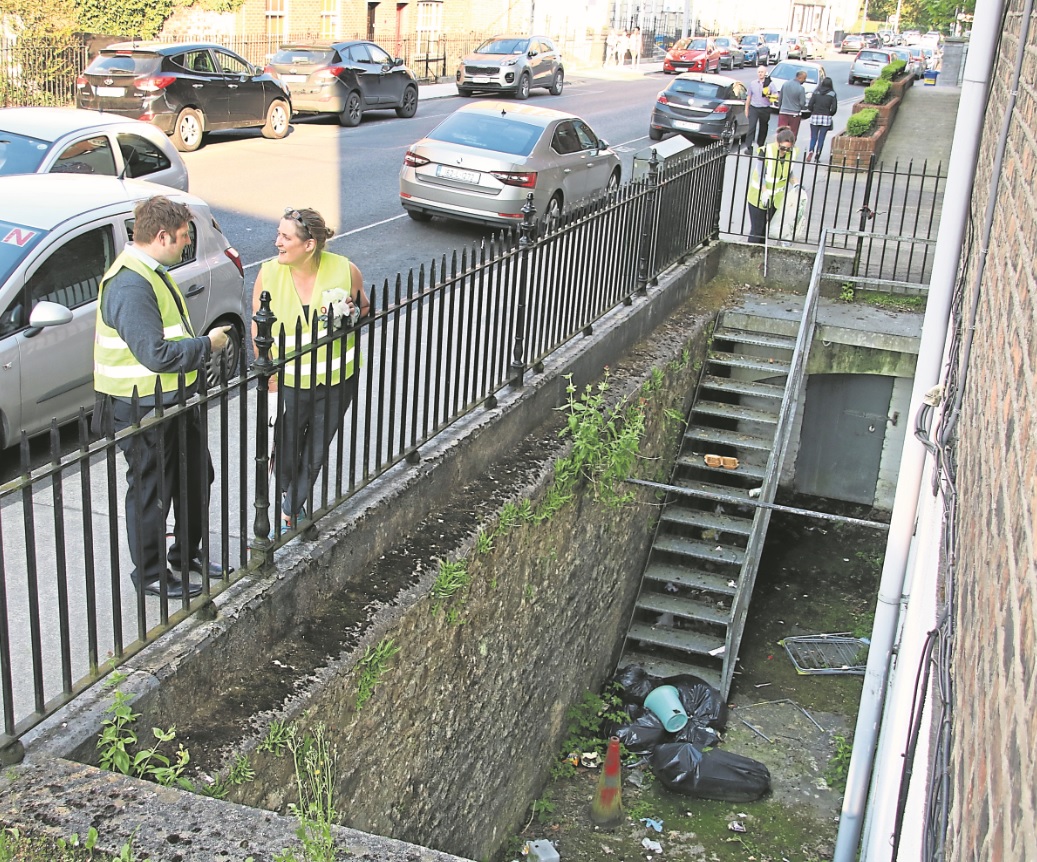 Seven volunteers were part of tonight’s team of cleaners, dividing into three groups, with the Limerick Leader joining Helen, and our colleague, the Limerick Chronicle historian Sharon Slater, who is also an active volunteer.

While seven is a good turnout, Maura O’Neill, Dooradoyle, says often the weather can represent both a blessing and a curse.

“We always hope when the weather is this good, it will encourage people to come out. But often-times, people want to do something else like go to the park or go for a walk. But we feel people can walk and pick up at the same time,” she smiled.

With this year’s entry to the national Tidy Towns contest submitted only last week, we focused on areas which needed specific improvement.

Picking up litter along the way, we travelled from Glentworth Street, southwards along Henry Street to the junction of Hartstonge Street, and back around to Upper Mallow Street.

Maura, who works in the Riverpoint complex in the city centre, was volunteered by her former manager to start taking part in the Tidy Towns clean-ups.

But over time, she became a firm fixture in the weekly walks, she said.

There is a fervent wish among the group for more people to join the effort.

“We do need more volunteers. Limerick is a big city, and when we see other Tidy Towns groups, they have massive amounts of volunteers in small towns and villages. We are fighting a battle in terms of the fact there are not many city centre residents. A lot of people take pride in where their kids go to school, where they go shopping, and where they go to church. But we deal with mainly business here,” Maura explains.

One person who does live in the city centre, and is looking after her property well is Dorothy McCourt, who lives in Lower Hartstonge Street.

She has decorated the outside of her home, with beautiful colourful plants, and paintings.

“It’s not about landlords, it’s down to residents taking personal care of our properties,” she tells us. “We’ve had American tourists come past, and they are not impressed with the condition of the buildings in Lower Hartstonge Street. I've heard them say it looks like the Red Light District, with some of the houses in appalling condition and burnt out with people squatting.”

Dorothy, a signwriter by trade, has teamed up with Tidy Towns to paint some signage for the group.

Another person we meet on our walk is James Lawlor, the director of Narrative Four, which won the annual Limerick City Tidy Towns award for 2017 – a prize given out in recognition to business owners who keep their premises in tip-top shape.

In partnership with Tidy Towns, Narrative Four are creating an “edible garden” for youngsters of the city to enjoy urban gardening. A team of 15 people aged between 15 and 20 are working hard at this now.

Asked why she volunteers, Sharon says: “The city is my back garden. I want it to look nice. I want it to look well. There is nothing more disheartening than wandering around and seeing rubbish everywhere. It makes it nicer for me personally – and that way, it’s nicer for everyone else!”

Jerry O’Connell, St Joseph’s Street is more succinct, when he says: “We love our city: it’s that simple.”

“I get frustrated when I see litter so to be able to do something about it, makes me feel I am doing something positive,” he explains.

The Limerick Tidy Towns group have embarked on a number of campaigns, one of the most high-profile last summer when they highlighted basements across the city, which were, as Helen O’Donnell describes it, being used as “a great big litter bin”. 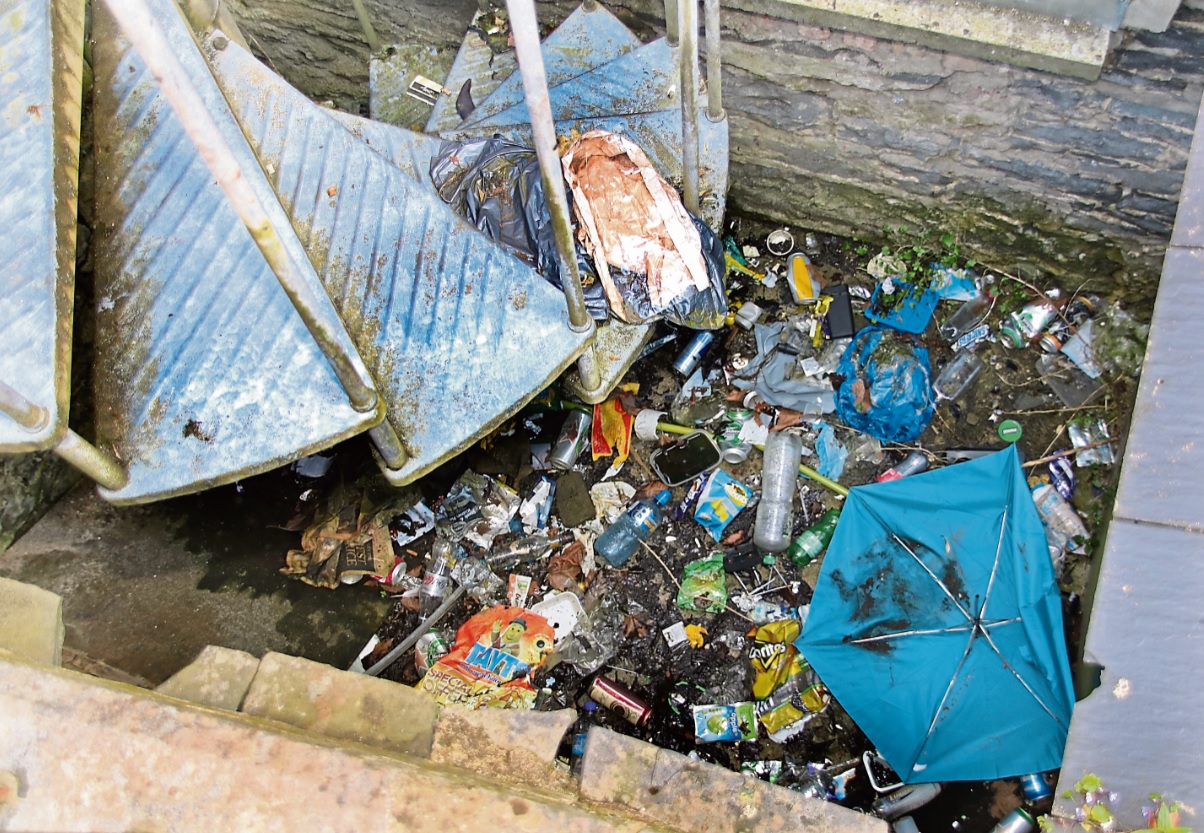 In 12 months, however, there has been a massive improvement.

Helen gestured to a basement below the former Bank Bar, saying: “Look at it – it’s squeaky clean.”

“If you walk up O’Connell Street, there are very few really bad ones nowadays. And the ones that are in derelict buildings,” she added.

On our walk, we come across a number of unconventional things which have been dumped – including a pair of crutches in a basement.

“Someone must have had a miraculous recovery!” Helen laughs.

“We have seen some strange and wonderful things over the years. We find loads of clothes. We sometimes find some very glamorous shoes, often on Sunday. We think someone lost their shoe the night before, then we go around a corner, and find the other shoe which has been dumped because the heel fell off,” she recalls.

Ann O’Malley said: “The thing I remember is finding a wallet and passport both on the same morning but belonging to two different people.”​

One thing that is, unfortunately, still regularly appearing on the city streets is cigarette ends dumped by smokers.

Sharon tells us she is planning one week to have a “blitz” on these distasteful pieces of litter.

“Sometimes we just have to walk past as we cannot gert much done on an evening if we just concentrate on cigarette butts. But one evening, we’ll spend the entire time on cigarette butts, and I’m sure we will get a bag or two filled,” she reveals.

There are many more events the group is organising in the coming months.

But at the end of our night with the group, we have collected two full bags of rubbish.

And, we hope we have helped make a difference to Limerick’s city streets.