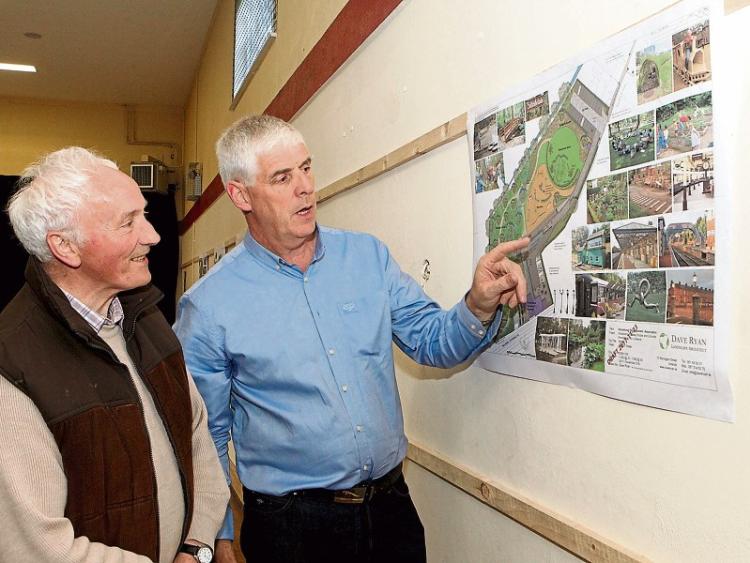 IT HAS been a long journey but there is light at the end of the tunnel for the men and women behind the railway-themed Knocklong Heritage Park.

After almost two decades of local endeavours, CIE is to lease two acres, including the stationmaster’s house and gardens, to Limerick City and County Council. The railway site will then be sublet to Knocklong Development Association.

Pat Walsh, chairman of Knocklong Heritage Park, expects the papers to be signed in the coming weeks. The total cost of the development is €660,000.

The park will include extensive garden, green and seated areas, walking trails, themed playground, cafeteria and shop, community office, heritage apartment for letting with private garden, outdoor classroom and visitor experience in the stationmaster’s house. A stream will form a central part of the park and the plan is to restore the original railway footbridge as a crossing point.

To sum up what the stationmaster’s house will be like, Mr Walsh says imagine stepping back in time to May 1919.

“There will be audio and visual content of the dramatic Rescue of Sean Hogan as well as other interactive surprises for the visitor,” said Mr Walsh, who added that the house will be a home to War of Independence memorabilia.

In May 1919, Sean Hogan, an IRA volunteer, was rescued from a train stopped at Knocklong station by comrades while being guarded by four armed RIC officers. Two were killed.

“In the historical context it was a very significant event in the War of Independence. After Sologhead Beg this was one of events that hit the British Forces hard and simultaneously boosted the IRA in the fight for Irish freedom.

“Nationally there is very little remembrance of the War of Independence outside of Dublin. This area in North Munster was a hotbed of resistance and is a fitting place for a remembrance,” said Mr Walsh.

The heritage park will be a huge boon to the locality.

“It will re-energise Knocklong and the surrounding areas. It will create employment in the building phase and when it’s up and running it will offer badly needed amenities and bring a steady stream of visitors to Knocklong.

“It will boost the local community and other businesses. It will be a safe and relaxing place for families to play and unwind,” said Mr Walsh.

In relation to visitor numbers, the committee have done detailed and in depth research on the crowds they expect to come to Knocklong.

“We have have done detailed cost projections and it clearly shows a viable business model is sustainable here,” said Mr Walsh.

The committee have thought of everything even down to the ticketing procedure. They envisage railway style tickets that can be punched and are inkeeping with the visitor experience.

The Knocklong Heritage Park chairman estimates it will take around three years to complete which will coincide with the War of Independence commemorations in 2021. Contractors, community employment scheme and voluntary groups will carry out the works.

“We have a very determined community group who are ready to get involved once the site is fenced off by the council. This group were there when we had the tremendously successful Rescue play in Knocklong in 2016 and they together with a wider group will be on board for the challenge,” said Mr Walsh, who added that they will be looking for local volunteers to work on the site.

“We welcome any support. We want a real community effort like we had for the Rescue play in 2016,” said Mr Walsh.

He and his committee have praised the efforts of those who have gone before them in getting to this stage.

“This project was in the pipeline for a long time and we are keen to remember the great work done by the late Tommy Fitzpatrick and Tom McInerney, who was part of this latest group before his untimely death. Tom was a founder member of the Na Piarsaigh club in Limerick.,” said Mr Walsh.

On behalf of the committee, he also expressed gratitude to Limerick City and County Council and CIE for their help in getting the park to this point where they will shortly be able to commence work.

Trains mighn’t stop in Knocklong train station any more but in a couple of years it is going to be a destination point once again.