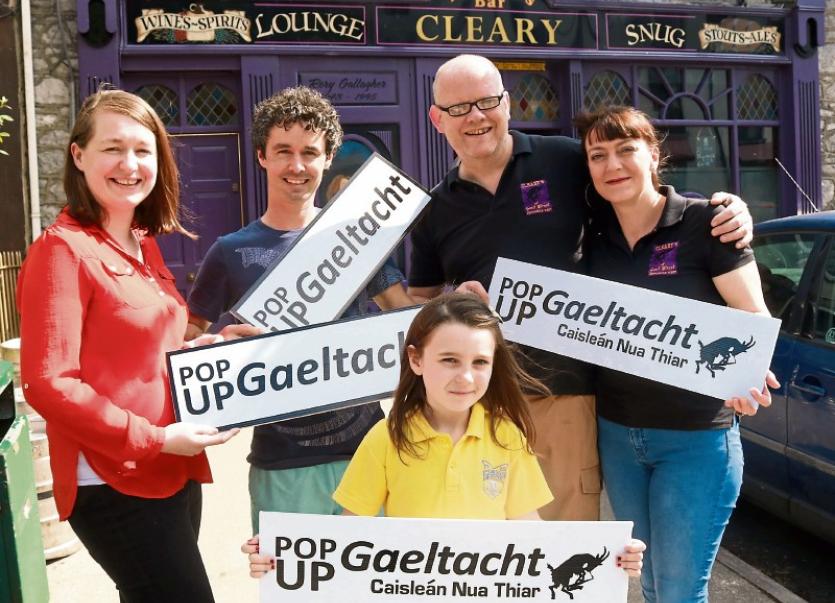 NEWCASTLE West has joined the growing, national and international movement for Pop Up Gaeltachts, a movement which is all about creating a welcoming space for people to converse as Gaeilge.

The first Pop Up took place in Clery’s Bar, South Quay at the weekend and proved so popular, another one has been organised for June.

Jacky Devine, or Jacky O’Dáimhín, was one of the main driving forces behind the event. He has been going to a Pop Up Gaeltacht in Listowel for the past  nine months or so and decided it was time to start one in his home town.

“It’s a great idea, “ he explained, adding that it is an idea that is taking off all around the country and even internationally. “It is starting up in places like Copenhagen,” he added.

He broached the idea with Seamus Clery and his partner Brenda Hennessy who were keen and they talked it out over a few months. Then, last Friday, it finally happened.

“I was expecting maybe 15 people,” Jacky admitted. “But there must have been 25 pushing 30 people there to talk as Gaeilge.”

They were from all walks of life, and with different levels of Irish, Jacky explained but the comhrá agus caidreamh went with a swing.

“We were blown away by it,” said Brenda. “It created a lively buzz.”

Local councillor Michael Collins and his friends added to the atmosphere with some traditional music and a lot of the bar’s regulars also got into the mood,

“I would have a big interest in Irish,” said Brenda whose daughter Norah is a pupil at the local gaelscoil.

For Friday’s Pop Up, she explained,  she had prepared sheets, containing simple words and phrases in Irish, “fun, relevant stuff such as selfies, a pint and so on.

“These sheets were handed round to customers so they could use them if they wished  during the course of the evening.

“People who weren’t as fluent as others were trying their best,” she continued while Seamus  added: “What really pleased us was that lads in their early 20s turned up and they were ordering beer as Gaeilge.”

Another bonus was that some of the Listowel Pop Up people came along last Friday night.

Friday, June 29 is the next Pop Up Gaeltacht, again in Clery’s, Newcastle West. Jacky Devine confirmed. And he is hoping there will be traditional music also on that night. “It is a bonus, a part of the tradition and a massive plus. The atmosphere is a lot better with the music,” he said.

Jacky’s interest in Irish was nurtured at Gaelscoil O’Dobhair after which he  went on to second-level at the Gaelcholaiste. “I always had an interest from an early age,” he added.

“I wouldn’t be a Gaelgóir,” he continued.

He hadn’t really spoken Irish after he left second-level until last year. At that stage, he had graduated as a civil engineer and worked in Australia when he decided to return home and graduate as a primary school teacher. “Since then I got back into Irish.”