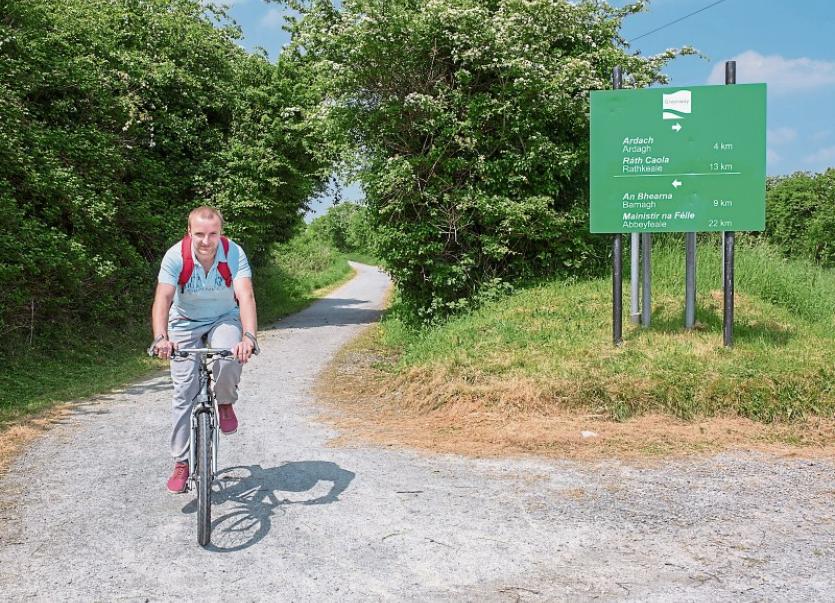 THIS Sunday is World Cycle Day and to mark it, a cycle from Abbeyfeale to Templeglantine along the Great Southern Greenway has been organised by Limerick City and County Council.

But before the cycle takes off from the old railway yard, behind the Railway Bar, in Abbeyfeale at 11am, Minister of State Patrick O’Donovan will launch three new loops as an integral part of the Great Southern Greenway which is Ireland’s first long-distance greenway.

The 39km greenway stretches from Rathkeale to the Kerry boundary, but these three loops are aimed at enticing visiting walkers and cyclists to “detour” to the three towns along the route: Rathkeale, Newcastle West and Abbeyfeale.

A special leaflet has been produced  by Limerick City and County Council to promote the loops and it contains information about points of interest and what to see and do  in the three towns. The Rathkeale and Abbeyfeale loops are just over 3km while the Newcastle West loop is 4.5km.

The new loops have been welcomed by the group which pioneered the greenway, the Great Southern Trail Group.

“We very much welcome anything that enhances connectivity, “ Liam O’Mahony, the chairman of the group said this week. “You want to see people coming into the towns.”

All three towns are on bus-routes, Mr O’Mahony pointed out, and the new, sign-posted loops will now clearly  link public transport to the greenway. This, he argued, will open up a lot of possibilities for people from Limerick and other visitors to take the bus, hop off, enjoy local facilities as well as a cycle or walk before getting back on the bus home.

The group, he added, would like to see bus companies offering good value, hop-on, hop-off  fares and family tickets for such round trips.

The three new connecting loops will add further to three existing loops, Mr O’Mahony said. These loops, which are finger-posted are: the William Smith OBrien loop which takes to the public road near Ardagh, skirts Cahermoyle and  returns to the greenway at Reens; the Tullig Wood loop taking in Templeglantine and the Rooska Loop which takes the walker/cyclist into the uphills at Barna.