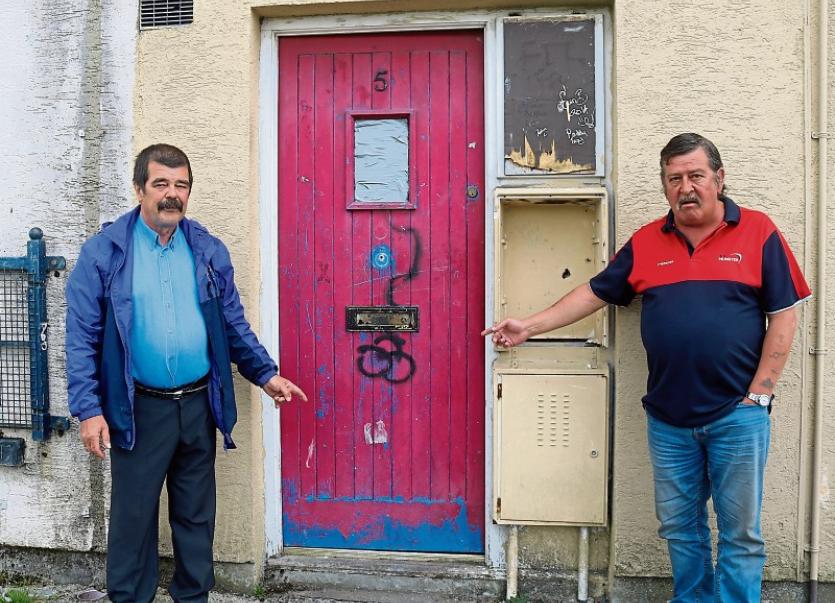 A LIMERICK man with pancreatitis has been unable to get a shower installed in his home – due to where he lives.

Patrick Joseph Molloy, 53, has told of how he has had to go and wash at his mother’s home, as he cannot get the council to install a shower at his own terraced house on the Hyde Road, where he has lived for 14 years.

In that time, he has seen his neighbours get huge investment to their homes, as their units fall just inside the boundary of the multi-million euro Limerick regeneration scheme.

But as he lives on the left-hand-side of the Hyde Road, just a few metres away from the regeneration line, he has been forced to make do.

The father-of-two suffers from pancreatitis which he says makes it difficult for him to climb in and out of his bath.

“I just want a new door and a new shower. I just want the same as everyone else is getting. I’ve been living the longest in this area,” said Patrick, known to friends as Joseph.

Due to his condition, Joseph’s mobility is limited, and he must rely on friends for support, in particular his mother Pauline, who lives close by.

“I just want what people on the other side of the road are getting. I should at least be entitled to that,” he said. “I’m lucky I have my mum whose home I can go and shower in. Without her, I don’t know what I’d do.”

Mr Hannan says Joe hopes going public with his ordeal will help him.

”A lot of people have let Joe down. A lot of politicians in the last 14 years have made false promises to this man and it’s not fair. We have had to go to the Limerick Leader to highlight this man’s issue,” he said.

Mr Hannan added: “All Joe wants is his basic rights – a front door and a shower. We’re​ talking only a couple of hundred euro here.”

“The Weston and Prospect communities are very united. We don’t begrudge anyone anything. But there should be no red line,” he said.

Gesturing across the street, Mr Hannan added: “Everyone on that side is regeneration.

The much-stalled Limerick Regeneration project was set up in 2007 to benefit communities in Ballinacurra Weston, Moyross and Southill.

As a consequence of this, many tenants in the estates were relocated away from the areas, and then offered brand new or refurbished houses back in the areas, including many on the Hyde Road.

A spokesperson for Limerick City and County Council said the authority “does not comment on individual cases as it is not appropriate to discuss an individual’s personal business in such a public forum.”

“All tenants of Limerick City and County Council can contact the local authority to discuss their accommodation needs,” they added.