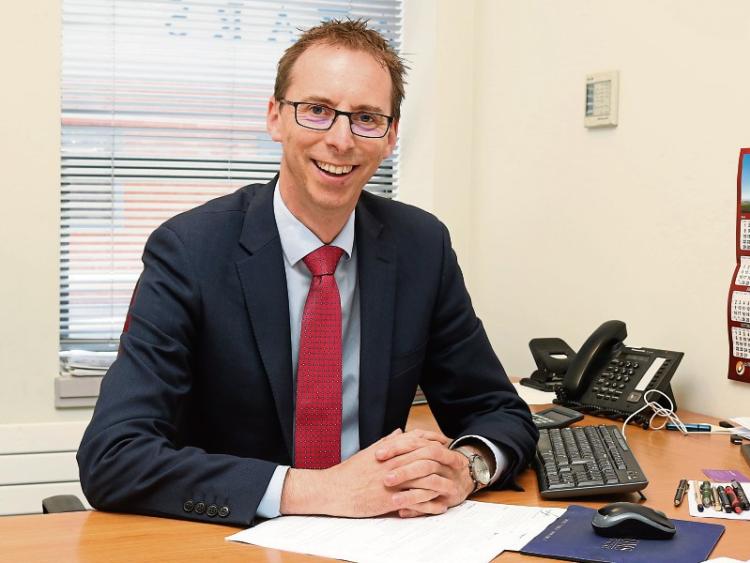 RICHARD Maguire heads the Limerick branch of accountancy firm Mazars, which arose from a merger with Maguire Caulfield Browne:

Tell us a little about Mazars

Here in Limerick, we employ 30 people at our offices in Henry Street. We have another number of staff coming on board over the next fortnight. We have announced a new outsourced payroll division, a complete new unit, which will see 25 new jobs.

When did Mazars enter the Limerick market?

We merged with Mazars in July 2017. We were basically looking to provide an alternative range of services for our clients to give them access to a broader range of services. Maguire Caulfield Browne was founded itself in 2014. Mazars would have three branches in Ireland – Dublin, Galway and Limerick.

I’m the lead partner in Limerick. That role involves managing the office, managing clients, looking after clients and trying to deliver new business to the office and deliver a quality service to the clients we have. We would have up to 900 clients in Limerick from individuals to large companies. But we cater for all types of clients.

I’m originally from Kilrush in Co Clare. But I have lived in Limerick since 1991. Now I live in Dooradoyle.

I attended secondary school at the CBS in Kilrush. Then I went to Cork and did my first two years of chartered accountancy at the Regional Technical College (RTC) which is now the Cork Institute of Technology. I went straight in to do chartered accountancy from the outset. So the only place I could do it was Waterford IT, or Cork IT. So I went there for two years, returning to Limerick in 1991, and finished out my exams while working, qualifying at the young age of 21!

When I graduated, I was in a training contract with a Limerick city accountancy company. I progressed through the ranks there, becoming a manager and a partner. After this, I set up my own practice with Maguire, Caulfield, Browne in 2014. I have built up this practice, trying to provide clients with a quality service, and tried to build that into our team here. When we started in 2014, we had 14 staff. We now have 30. In 2017, we merged with Mazars.

What brought this merger about?

It was about the service to our clients. I looked around to see which would be a good fit for our organisation in terms of internationally for the range of services and culturally. We needed to get to work with like-minded people who had the same desires and goals that we had, but who would also fit in with who our clients were. In the Mid-West we were dealing with predominantly the SME market. With having an international affiliation, it gave us access to larger corporates which we would not have got if we just had a medium sized practice.

We have just announced our outsourced payroll unit, so we’d like to get that bedded down over the next 12 months. We are also going to have a consulting unit which we intend opening up here which will provide consultancy on HR and IT services. We also want to build on the brand of Mazars as it wouldn’t be very well known in Limerick. Plus, we want to continue to give the service to our clients so they can be an ongoing referrer of work.

I think it would be remiss if I didn’t say someone local who has done a lot for the place. When you look at what has happened in Adare, I think JP McManus and what he has achieved, you have to praise it. He has put hundreds of millions into Adare. You’d question how long it would take to get that money back for him. But it’s a phenomenal facility and legacy to leave this area.

The amount of tourists coming to this region particularly for that facility is amazing. You also have to admire the vision of Limerick City and County Council and Limerick Twenty Thirty. Look at what they’ve done in Troy Studios, and the number of jobs they have here. It’s very admirable.

The other one, from Ms Keller, is ‘I am only one, but I am one. I cannot do everything, but still I can do something. I will not refuse to do something I can do’. That is something I came across eight years ago, and I still use it.

The Special Olympics would be a big passion of mine. When the competition came to Limerick in 2010, it was a case of working, then the Special Olympics, then bed for three months. But the five days of the games were just so special and I’ve stayed involved since then.

I also like to get out on the lake in Killaloe. Anywhere near water is a big switch-off for me. That’s my time out really.