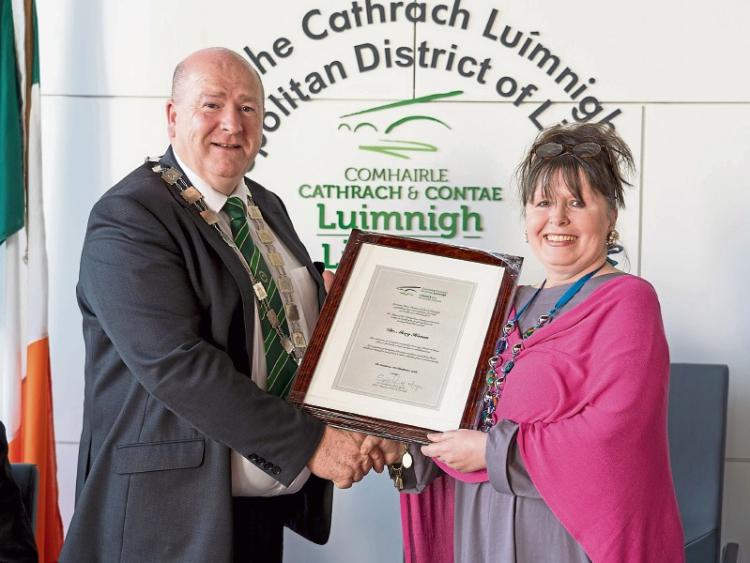 ONE of Limerick’s foremost influences on the study of race and ethnic relations, Dr Mary Honan, has been given a top civic honour.

Metropolitan mayor Sean Lynch awarded Dr Honan from St Lawrence Park a special reception in honour of her cultural research, recognising her research on race and ethnic relations as well as peace and reconciliation in association with a programme on E.R.I.C (Education, Research, Innovation and Culture) by the British and Irish Trading Alliances.

“She is recognised by her peers as a marvellous writer and an equally wonderful artist with a BA Honours in art and design from the Limerick School of Art and Design,” the mayor added.

Dr Honan has brought out a book, focusing on the literary representation of World War Childhood.

Published in 2017, the piece highlights the impact all violence, as well as racial and ethnic intolerance has on the youngest victims of conflict.

Dr Matthew Potter, who curates the city library was present alongside Dr Matthew Casey, a fellow of the Irish State to congratulate Dr Honan.

“In the book, Mary examines diaries, letters, comics, allegories, time-travel novels, fairy-tales and even novels about the Hitler Youth. Because of its broad focus, the book is of interest to just about everyone, including the diminishing numbers of World War II survivors, historians, teachers and librarians, but above all the general public,” Dr Potter said, also hailing her as a “renaissance woman” and a “public academic.”