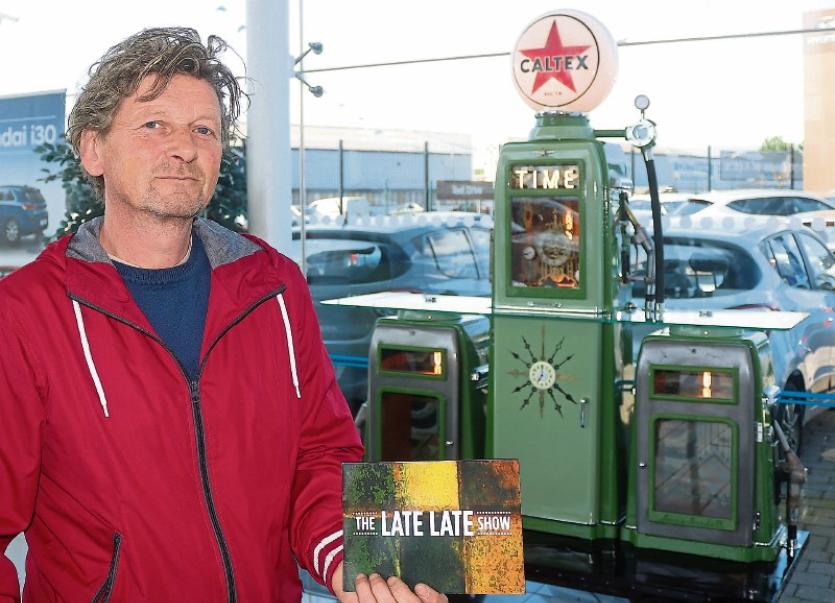 WINNING is becoming an annual event for Ballyneety’s Des Kingston.

Last year, Des’s  show garden won him the Super Garden title and he went on to win a silver medal at Bloom 2017.  Now, his creativity has again seen him appear on national television where last Friday he won the Late Late Show’s annual Antique Restoration competition.

He took two old Caltex petrol pumps, restored them and then repurposed them into a sideboard on wheels, complete with a clock, a drinks cabinet and cupboards for glasses.

Now, although he says it breaks his heart to do so, he is putting it up for sale and is convinced it will appeal to classic car collectors or someone with a love of industrial chic.

“I like antiques, I grew up with them. My father was an antique dealer in Tipperary,” Des explained. But fine furniture doesn’t really interest him.

“I particularly like iconic Irish pieces that we all remember from our childhood, like the petrol pumps or phone boxes. They are the things that grab me. There is great nostalgia associated with them and I think Irish people like nostalgia.”

Des is particularly interested in finding new and creative purposes for old things.

For his award-winning Super Garden last year, he repurposed an old Ford Prefect, cutting off the front of it and turning it into a barbeque. And when he spotted the two old petrol pumps in a barn on the Tipperary road, he knew he could do something.

For the Late Late Show competition, he submitted his idea and was one of five entries selected to proceed. Each competitor got eight weeks and a budget of €800 to complete their project.

For Des, this involved stripping back the pumps, sand-blasting them, then priming and respraying them, as well as fitting out the interiors, having cut one of the pumps in half. He then mounted the entire thing on an old Guinness trolley, originally used for moving barrels of porter and topped off with the iconic, lit-up Caltex sign.   But, he admitted, he spent a fair whack of his own money in addition to the €800 and his six weeks’ of labour.

“I enjoyed doing it,” he said. “I love doing that kind of work.

“It was very tedious but very satisfying.”

He also now has a museum-quality piece that is valued at thousands of euro as well as his prize-money of €500 and €500 worth of vouchers.

“I am a collector and it breaks my heart to sell anything,” he admitted. But he has, reluctantly,  put it up for sale and all this week it has been on display at the Limerick Motor Company at Ballysimon.

He hopes that a fellow classic car lover or collector will be interested enough to pay the price. Or perhaps someone with a very contemporary home who likes the current industrial style of interior design.