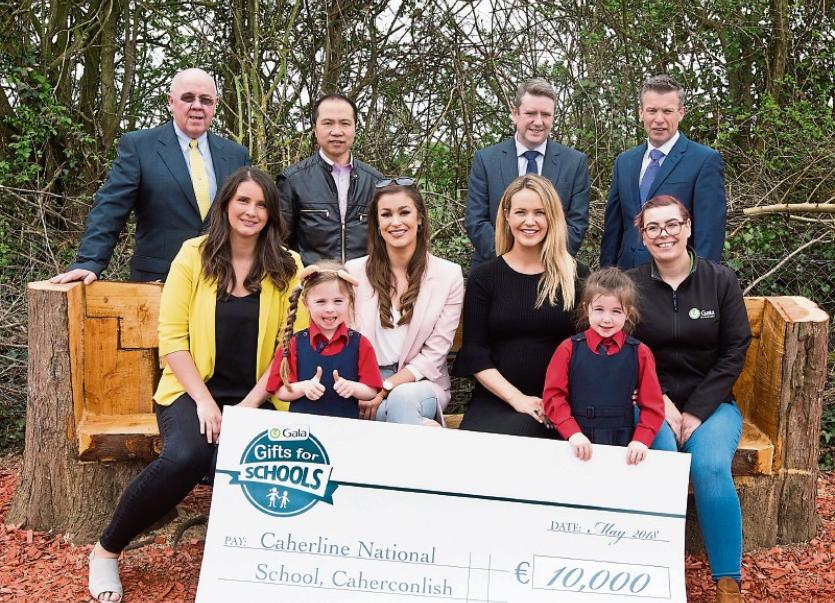 WEEKS don’t get much better than this – Caherline NS in County Limerick won a Show Racism the Red Card campaign on a Monday and on Friday they received €10k from Gala.

Fifth class pupils put together a multi-part project for the anti-racism competition, which included a papier mache globe, video, song, and a large painting depicting the message “We are all the same inside.”

They were awarded first place in the primary category at the ceremony in Tallaght soccer stadium. Minister for Children Katherine Zappone presented the accolade. Pupils also met and were congratulated by Ireland manager Martin O’ Neill.

If that wasn’t enough excitement for one week, on Friday actress Aoibhín Garrihy surprised the school by appearing at a special assembly in which she gifted the school, on behalf of Gala Retail, €10,000. It was part of GalaRetail’s 20th anniversary celebrations.

A day to remember:
Caherline N.S are the National Winners of the Gala Gifts for schools competition. Well done everyone!

Caherline was picked from hundreds of schools as the winner in the Gala Gifts for Schools competition. They submitted a 30 second video on how they would spend a ‘Gala Gift’ to improve the education and school days of pupils. The school pledged to spend it on catering for the needs of children with autism.

Michael McCarthy, principal, said they had the “most fantastic week”.

“Showing Racism the Red Card was a wonderful award to win.  We are particularly proud of this as it promotes inclusion of all pupils in our school. Then on Friday it was announced that we were the winners of the Gala Gifts competition. This meant that our school won a most generous prize of €10,000. Sincere thanks to all at Gala for this award,” said Michael.

He said it couldn’t have come at a better time.

“Currently we are fundraising to buy land for an additional classroom and to build an autism unit. While we haven’t reached our target as of yet, this prize will be a huge boost to us. People can still support us on our Caherline NS GoFundMe page,” said Michael.  Amid all the celebrations he said the week contained an important lesson for pupils.

“Hard work, preparation and teamwork pays off. Special thanks to Miss Orlagh Eichholz and Peter Tiernan, they proved to be a winning combination on two occasions this week.

“Their efforts, along with our pupils’ dedication have brought great pride and success to our school. They worked into lunch breaks and after school to enter both competitions.

“Well done to Miss Riordan and Sharon Casey on these awards and thanks to them for their support. Thanks also to the ever supportive and hardworking staff of our school, without their assistance and support our pupils wouldn’t have enjoyed the benefits of these awards,” he said.