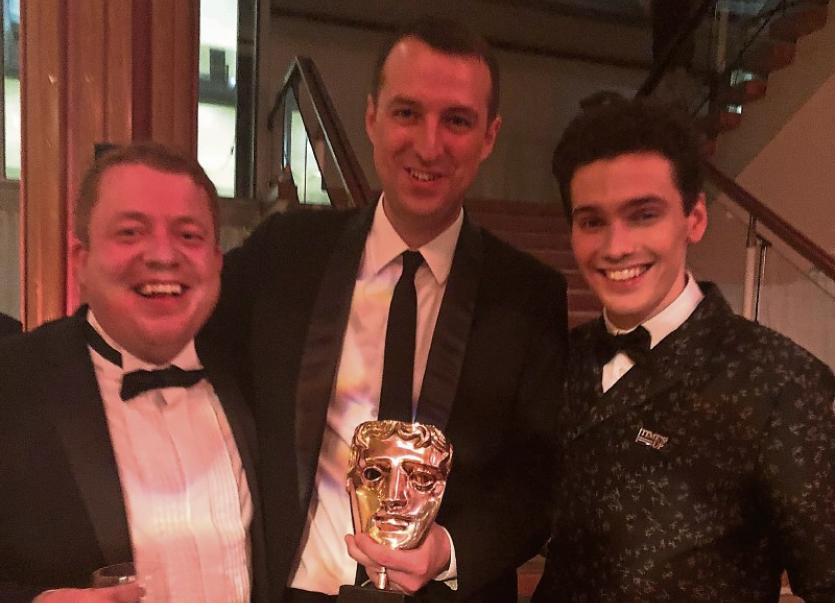 WHILE one Bulfin brother chases All-Ireland glory coaching the Wexford hurlers, the other is picking up a Bafta for the hit BBC drama Peaky Blinders.

On Sunday, Tommy Bulfin from Bruff was among a sea of bespoke designer gowns and tuxedos at the 2018 British Academy Television Awards at the Royal Festival Hall in London while his brother Seoirse was keeping an eye on Leinster rivals Kilkenny and Dublin in the hurling championship.

Tommy is the BBC’s Commissioning Editor for Northern Ireland and since taking up the role last year has been working on the latest series of Peaky Blinders as well as a host of other top shows including EastEnders and Line of Duty.

“It was really good fun,” Tommy told the Leader this week of his attendance at the prestigious awards ceremony where Peaky Blinders picked up the Bafta for best drama series.

Congratulations to all involved in @ThePeakyBlinder for their @BAFTA Award for Best Drama Series. It’s a brilliant, distinctive work richly deserving of its accolades.

“Peaky Blinders winning was lovely. I have been to the Baftas before. I have been in the industry here for over 10 years now so I know a lot of the other producers, directors and writers. Writers are obviously key to everything in TV drama. It was a really good opportunity to bump into people.”

Set in 1920s  Birmingham, England in the aftermath of World War I, Peaky Blinders follows the exploits of the Shelby crime family with Cork-born actor Cillian Murphy playing the lead character, Tommy Shelby.

“Cillian is lovely. They are all really professional,” Tommy said of the cast and crew.

A graduate of Mary Immaculate College where he completed a BA in Media and English, Tommy has always shown a flair for media work. His love of films became apparent as a child, explained his father, Leader notes correspondent for the Bruff area, Tom Bulfin.

“He was always into films, television and media and was very involved in drama and Limerick Youth Theatre and the Honey Fitz Theatre.  It didn’t come from his father,” laughed Tom who is also the former principal of the primary school in Bruff and is heavily involved in GAA. Tom's other son, Seoirse, is equally as well-known in sporting circles in his role as a lecturer with Limerick Institute of Technology's sports department and in his role as Davy Fitzgerald's right-hand man with the Wexford hurlers.

Over the past 10 years, Tommy, 36, has gained a wealth of experience working in the UK before taking up his role with the BBC.

In his role Tommy is also responsible for finding the new dramas for television.

“Producers come to us and pitch their ideas and then we develop those ideas within the BBC. If the project is commissioned to production by the Controller of Drama and the Director of Content, then the commissioning editor is responsible from that point onwards in terms of transmission and after transmission.We want to ensure it is the best it can be but also we have to think of the BBC audience and be aware of what channel it is on and that we are best serving their needs.”

Tommy does an occasional set visit.

“When they are filming every day you get the rushes (the raw footage from a day's shooting) and you just keep an eye on things across filming. When it is in output stage, we have a brilliant team in BBC in publicity and marketing, editorial policy and compliance who work with you to ensure that it is all suitable in terms of language and violence. They are really good - they ensure that we have the best end product.

While he  is primarily based in London Tommy makes regular trips to Belfast to see the team there.

After graduating from Mary Immaculate College, he worked in Dublin for a short time and then completed a Masters in film and TV producing in Royal Holloway, University of London.

He then got a job as an office runner at Company Pictures - one of the UK’s leading producers of innovative and award-winning drama. He worked his way up to script editor before moving to New Pictures where he worked as a script editor before becoming development producer. He script edited Indian Summers for Channel 4 and The Missing for BBC One.

The proud Limerick man was only home in Bruff last week with his wife, Grainne.“It’s always nice to get back and it’s really exciting now in Limerick with the development of Troy Studios. It’s really an exciting time.” said.