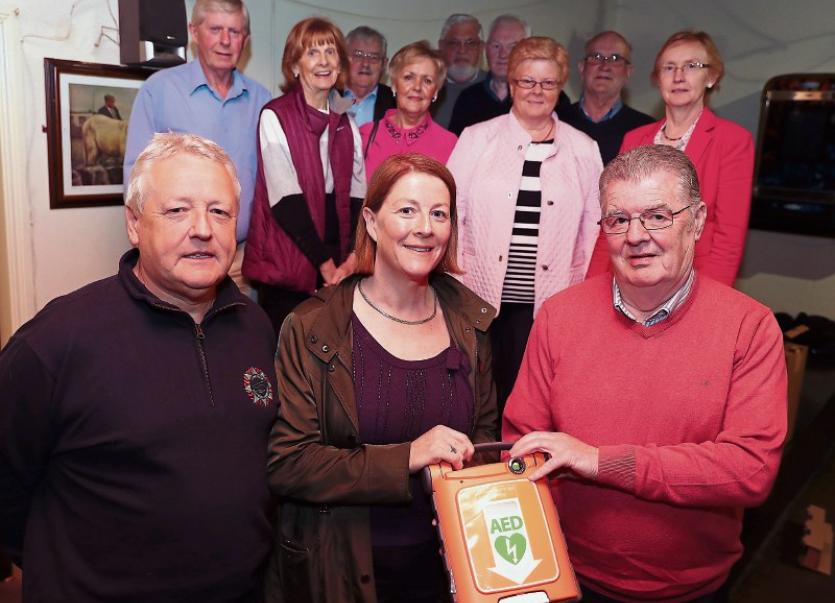 A CHANCE conversation in a public house in Pallasgreen will save lives.

Local lady Bernie O’Sullivan was having a chat with Dermot and Cora, proprietors of O’Dwyer’s, last February.

“We were talking about a wedding where this particular person was actually declared dead. A doctor who was there couldn’t bring him back. He was in his early sixties, he was up dancing and the next thing he just dropped. The defibrillator brought him back and he is fine,” said Bernie, secretary of the Pallasgreen Community Defibrillator committee.

In the space of a couple of months through fundraising and donations they have launched three defibrillators. One will be stationed outside Regan’s Centra in New Pallas, another located at Power’s Pub in Old Pallas and one at Harty’s former pub in Nicker. They are also helping residents of Barna to get one too.

“We raised nearly €6,000 in a couple of months and we got one defibrillator donated by Marianne Fitzgibbon of Widdess Fitzgibbon

Pharmacy. We would still be fundraising only for her. She donated one in memory of her mother Maureen Fitzgibbon,” said Bernie, who thanked Mrs Franklin. Each defibrillator costs over €3,000.

Chairman, Tony Greene (Snr) launched the three devices and thanked all for their support at the Red Deer on Saturday night. Invited guest,  John Mulready, station officer at Cappamore Fire Brigade, gave a very informative talk on the importance of having the devices in the community and also for people to perform CPR if the situation arises.

While they have a number of trained operators, Bernie said they need more volunteers. Those wishing to become responders and trained to use the devices are asked to come to an open training evening at 8pm on Tuesday, May 22 in Pallasgreen Community Centre.

“We would love people to come on the night. Fleming Medical, where we purchased the defibrillators, are supplying the training and doing a demonstration,” said Bernie.