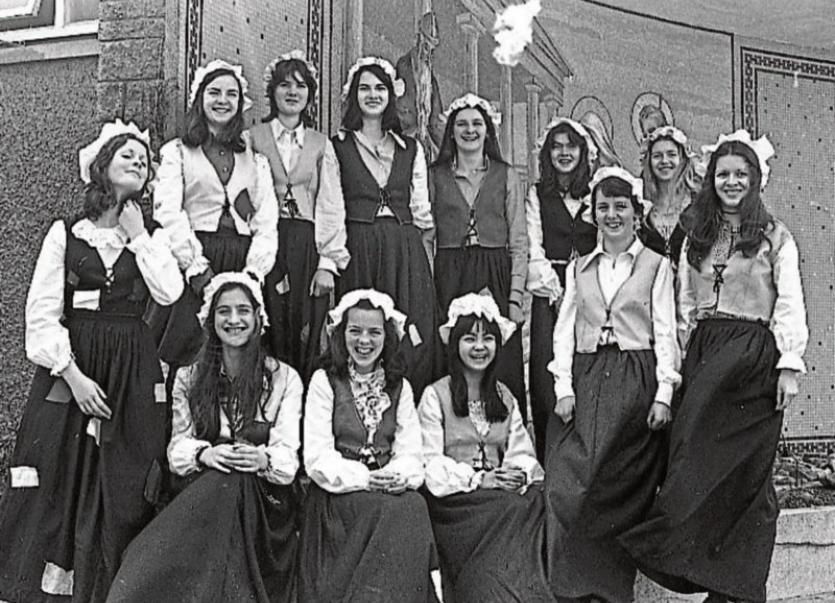 The Presentation Order was founded by Nano Nagle, a Cork native who joined religious life in 1776, the bicentennial which was marked in 1976 with a series of events including a school pageant

THE foundation of the Presentation Convent on Sexton Street can be traced to Catherine Maria King. King was born about 1786 in Waterford.

She was the only daughter of John King of Waterford. Following his death, she moved Limerick to live with her uncle, a retired Naval Officer Captain William Moore and his wife Mary. According to his obituary in the Chronicle March 16, 1836 William Moore in his younger year had “served in Admiral Rodney’s fleet, and was blown up in a frigate while engaged with a French ship-of-war.”

King came from a wealthy Protestant family but converted to Catholicism at the age of nineteen. This was thought to be due to the influence of her aunt Mary Moore. She entered the Visitation Convert in Shepton Mallet, England but failing health compelled her to return to Limerick.

Soon after her return to Limerick, she founded a school for the poor children of St Michael’s Parish in Sexton Street. The initial cost of this school was covered by an inheritance she received following the death of her uncle. Her school proved popular and numbers soared. Taking the advice of Hogan, she applied to the Presentation Convent in Cork, for some nuns to assist in her work.

Her call for help met with willing and ready response. On May 8, 1837, three Sisters, Mary Joseph Harnett, Superioress; Mary Stanislaus Drennan and Mary Francis Cantillon came to Sexton Street, and established their convent.

King used the remainer of her inheritance to help fund the convent which was to be located next to the presbytery for the clergy of St Michael’s parish. The total cost of the convent and school was £4,300.

The school opened on May 29, 1837, with one hundred and fifty pupils from Miss King’s old school, which was situated across the street. The Chronicle wrote on December 2, 1837 about a charity sermon held to benefit the school.

“A sermon will be preached on Sunday next (first Sunday in Advent) in Saint Michael’s Chapel, at half-past two o’clock, by the Very Rev Dr Coll, in aid of the Female Poor School, Sexton Street, under the superintendence of the Ladies of the Presentation Order. In this school 340 girls daily receive the blessings of gratuitous instruction; which include not only a religious and moral education, but also reading, writing, arithmetic and every sort of useful work.

"The children are supplied with all of the materials necessary for the different branches of education, and the more destitute among them, with such clothing as the funds of the Convent afford. This, the first appeal, is, therefore, made to an enlightened public – by whose generosity it can alone subsist – with the earnest hope, that every possible assistance, will be cheerfully given to so valuable an institution.”

A Limerick doctor James F Carroll contributed a sum of £500 to build it funded the convent church. Carroll passed away in September 1837 and the Chronicle of September 20, 1837 gave him a large obituary.

“Sunday, last, at his house in George’s-street, of a short illness induced by cold, taken in visiting a patient at night, not far from town, James F Carroll, Esq, M.M. a gentleman who for some years past had been at the head of his profession in this city, and enjoyed a deservedly high reputation with the faculty and public. His character as a physician of most extensive practice, great experience, and acknowledged skill, derived, if possible, a brighter lustre from his gentlemanlike manners and address, while the innate goodness of Christianity was apparent in his intercourse with the sick poor, whose infirmities and distress ever found a responsive echo in his bosom.

"The premature demise of one so justly esteemed, has raised a sensation of profound regret in the public mind. His remains were this morning interred at St Mary’s church-yard, attended by a train of private carriages, and citizens on foot, forming a cortege that extended from George’s-street, over the New-bridge, and close to the burial place.”

After a few years, Miss King entered the Convent as a novice and pronounced her vow on September 8, 1841. She takes the religious name of Mary de Chantel. She was Superior of the Convent from 1843 to 1849 and died November 2, 1866. Her death was noted in the columns of the Chronicle.

One of the earliest novices at Bethlehem House, as the Convent on Sexton Street was then called was Miss Margaret O’Gorman, youngest daughter of Mr P. O’Gorman, Patrick Street. Mr O’Gorman was a prominent Limerick bookseller and stationer.

The reception of Miss O’Gorman took place on November 5, 1839, the following account of the proceedings come from the Chronicle archives.

“The chapel was filled to excess with families of respectability. The Right Rev Dr Ryan, Bishop, attended by Rev Father Raleigh, as Deacon, and near thirty of the clergy of his diocese entered. The Prelate, in his pontifical robes, having ascended the altar, the organ pealed forth, and the nuns entered (each bearing a lighted taper in her hand) by that part of the building reserved for them.

The anthem, ‘Veni Creatoe Spiritus’, was then sung by the ladies of the Order, with very superior taste and execution, and the Bishop, assisted by the Deacon, proceeded with the service. The novice was led forward and presented by two of the Sisters arrayed in her secular robe. She appeared quite calm and wrapt up in the contemplation of the scene in which she was to take so prominent a part. Her features prepossessing and her deportment dignified.

Dr Ryan, having descended from the altar, presented the young lady with a lighted candle, and read with her for some time, after which the Very Rev Dr Coll, of Newcastle, entered the pulpit and delivered a most eloquent and touching discourse.

On the conclusion of the sermon, the Bishop again addressed her, asking if she was quite satisfied and content with the choice she was about to make; whether she had made herself particularly acquainted with the rules of the institution, and learned the discipline of the Order, with the other interrogations usually put, to all of which she replied in the affirmative, with an ardour which showed how intently she was bent on the consummation of her wishes; after which another hym was sung, and the young lady retired for a short time, but again returned in the dress of the Presentation Order, escorted as before by two nuns.

Having trampled underfoot the gay apparel in which she was attired at the commencement of the ceremony, she assumed the veil and embraced each of the Sisterhood. She then sung in a firm and harmonious voice the beautiful Psalm, ‘In Exitu Israel de Egypto’, accompanied by the organ.

The Prelated and clergy offered up a prayer, in which all present joined. The procession returned and the ceremony terminated.”