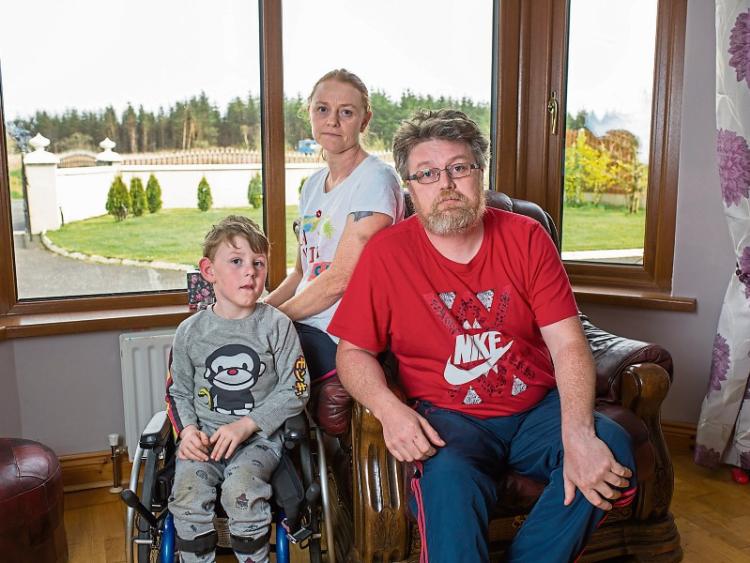 Shane Enright with his parents Richard and Caroline

THE wait goes on for the Enright family in County Limerick who have spent the last 18 months looking for a viable solution to their dilemma: how to provide adapted accommodation for their son Shane, who has cerebral palsy and other complications.

But in their search to provide that accommodation at a cost of €80,000 and rising, Richard and Caroline Enright, Athea, have been turned down by various financial institutions and to date, the only official offer has been an adaptation grant of  €15,400.

Now, their campaign is reaching a new crisis point. Next month, Richard is due to undergo a series of procedures because of his arthritis, which will  leave Caroline, who also suffers from arthritis, on her own dealing with the physical lifting and other physical care of Shane while Richard recovers.

Last Friday, Housing Minister Eoghan Murphy announced that over €66m would be available in 2018  for adaptation grants for older people and people with a disability and that funding of  €3,243,814 would be coming to Limerick. But unless the maximum grant  of €30,000 is raised, this will mean little for the Enrights.

Mr Enright said that two council officials had visited their Athea home last week and informed them there had been changes. It was, he added, the first time any official had visited the house. But they have nothing in writing and  he and his wife are still left with more questions than answers.

Meanwhile, Shane’s needs are not being met.

However, he added: “Nobody should have to beg for money. We have to bare our souls to the whole country. We are just trying to protect Shane.

“We are just ordinary people in an extraordinary situation. We always thought there would be help there if we needed it.”

Mr Enright reiterated the position he spelt out in the Limerick Leader last week.  They are not looking for hand-outs, he stressed, but they are looking for   a flexible deal that would allow them to get on with adapting their home.

“We are not looking for something for nothing,” he and his wife have stressed.