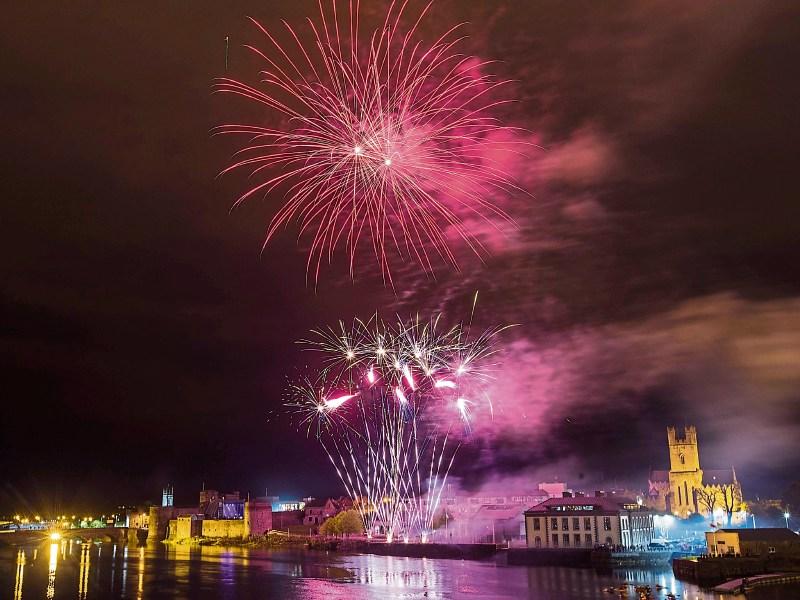 Riverfest 2018 went out with a bang last night, as thousands of people lined the banks of the Shannon to witness a spectacular fireworks display. PICTURE: SEAN CURTIN/TRUEMEDIA

RIVERFEST 2018 has been hailed as “the most successful yet” as more than 100,000 people flocked to Limerick over the weekend.

The city basked in bright sunshine across the weekend, with more than 25,000 people lining the banks of the river as the festival went out with a bang last night, an impressive fireworks display lighting the night sky.

It is likely to be Ireland’s biggest fireworks display of the summer, and it followed the largest participatory event outside Dublin earlier in the day, as more than 13,000 participants braved the heat to take part in the Bon Secours Hospital Great Limerick Run.

Limerick officially owns the May Bank Holiday weekend! #RiverfestLimerick 2018 was without doubt the BEST year yet as an estimated 100,000 people came to #Limerick to celebrate the city!

At a “conservative estimate”, Riverfest organisers believe Limerick’s main summer festival will deliver a boost of up to €7m to the local economy.

A number of new attractions were brought in this year, including the ‘Seabreacher Shark’, a daredevil aquatic spectable in an 18-foot shark-craft travelling at speeds of up to 80km per hour across the Shannon.

And one of the most popular attractions at the festival was the Le Eithne naval vessel where many families enjoyed a tour of the Irish ship: almost 2,000 jumped on board on Saturday and Sunday afternoon alone.

Twenty cooking teams from across Limerick took part in the Barbecue on the Boardwalk on Howley’s Quay cooking one traditional dish, with the overall joint winners Limerick Pride and Pharmacia Bar.

Limerick Suicide Watch, and the Limerick Leader’s very own team, the ‘Leader Feeders’ were runners up.

Another new addition to the festival was the Limerick Food Experience in the garden of the Hunt Museum which showcased local produce.

Annual favourites like Fashion Friday also returned, with the Riverfestival Village drawing thousands of people – with heavy queues building at Arthur’s Quay during the busiest parts of Saturday and Sunday.

Deputy Mayor Marian Hurley said: “Limerick looked absolutely amazing in glorious sunshine all weekend. There was just so much happening and plenty of free activities and events to keep all ages happy. I was particularly delighted to see so much people turn out to support all the participants in the Bon Secours Great Limerick Run and what a fantastic fireworks display to round off a wonderful weekend in the city.”

Sheila Deegan, Culture and Arts Officer with Limerick City and County Council added: “I am still in awe of the swimmers who took part in the two social swims in the River Shannon, getting into the river at the exact spot where the Vikings landed in Limerick. The investment by Limerick City and County Council into large scale civic events has given Limerick a cultural confidence for citizens and visitors alike to remember but also to re-present Limerick and all its possible futures.”

Head of marketing at the council Laura Ryan said: “The city was buzzing all weekend and so many people are going away with a fantastic impression of Limerick after a hugely successful Riverfest 2018. When you combine the economic impact of the festivities, the Bon Secours Great Limerick Run and the Munster match, the benefit to the city is conservatively estimated at between €5m-7m with the weekend now the most important of the year for accommodation providers. It’s also a super showcase of Limerick life as the city grows and develops its visitor offering as the gateway to the Wild Atlantic Way.”