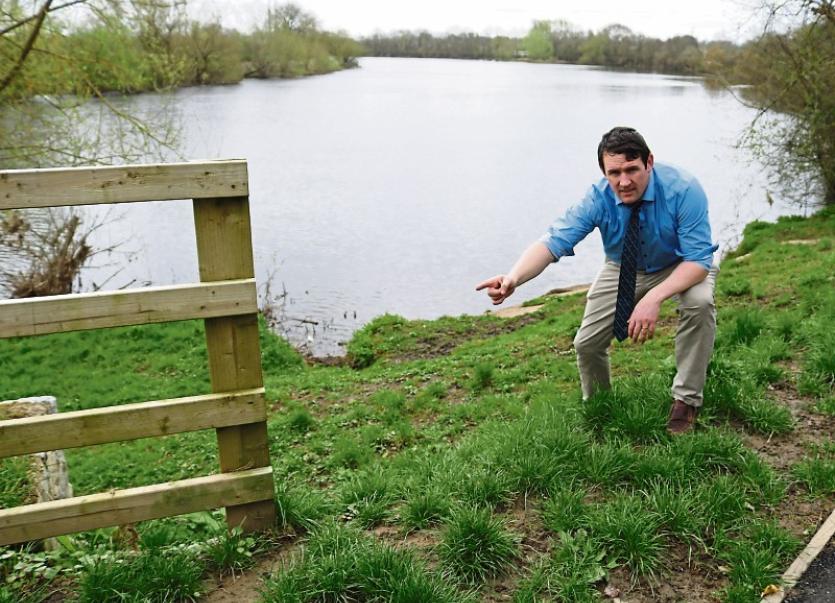 This here, no further: Cllr Frankie Daly outlines where the fencing stops at the Canal Bank

INDEPENDENT metropolitan councillor Frankie Daly has warned of a repeat of the Killarney horse tragedy in Limerick – unless fencing is built along the Canal Bank.

An American couple in their 60s were killed near Killarney after they were flung down a 12-foot ravine into rocks when their horse bolted in the Gap of Dunloe.

Now, Cllr Daly wants the local authority to put in steps to prevent this potentially happening here on the walk between the city and the University of Limerick.

“I’d be concerned. There is some fencing there, but only on around 20% of the walk. I walk their weekly with the family, and it appears the most dangerous parts have not been fenced off,” Cllr Daly told the Limerick Leader.

He feels the parts of the Canal Bank walk which are fenced off are purely for “aesthetic” reasons, rather than safety.

“I just feel with the better weather coming in this summer, I do not want to see a repeat of Killarney,” he said, “There’s going to be a lot of people walking, jogging and cycling. I feel and believe there is a huge possibility of a fatality or someone getting badly hurt if this is not fenced off. If’s only wooden fencing I’m calling on from the start of the Guinness Bridge. Get 80% of it sealed off, it will make a massive difference.”

The former Labour member said cost should not be an issue in this case, adding “You cannot put a price on life. This would provide huge peace of mind going forward.”

Cllr Daly has been lobbying the council’s director of service on this matter.

However, a spokesperson for Limerick City and County Council said the walkway was built in accordance with permission given by An Bord Pleanala, and cannot be changed.

“The first proposal had included additional fencing, but An Bord Pleanala instructed Limerick Smarter Travel to re-design with certain exclusions. The permission granted is as built,” the spokesperson added.