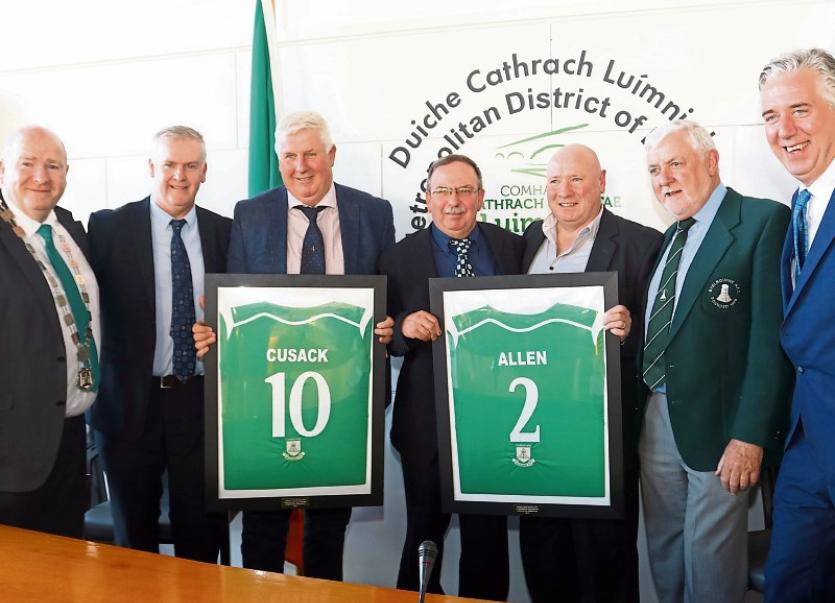 Tony Cusack and David Allen are presented with jerseys from Shelbourne FC at the mayoral reception with Mayor of Limerick Sean Lynch and John Delaney, FAI present Picture: Brendan Gleeson

METROPOLITAN mayor Sean Lynch has honoured the city’s oldest soccer club  with a reception to mark its 90th anniversary.

Shelbourne AFC was formed in 1928 at Hassett’s Cross, before moving to Kinsella’s at the Meelick Road, Bateman Park, the Limerick Country Club, and finally to its current location of Shelbourne Park.

Over the decades, generations of families have played for the popular club, which at present serves 250 children on the northside.

Members of the committee of the club were joined by the chief executive of the Football Association of Ireland (FAI) John Delaney at the reception in City Hall this week.

Cllr Lynch said: “They say the only perfection there is, is the perfection of helping others and this club lives up to this mantra quite well. Shelbourne is a club where so many start their career to be coached, nurtured, and mentored by great people. You are always encouraged to set your goals high and don’t stop until you get there.”

It was a joyous occasion as Brian Finn played out ‘Limerick, you’re a lady’, and the anthemic ‘You’ll never walk alone’.

David Crowe, whose son and father, the former councillor Mick have both played for Shelbourne, admitted feeling a touch of emotion as the music blared out.

“My son couldn’t play for a better club. I love it. I was away in America for so long, for 30 years, but when I returned, it was like I’d never been away.”

Club chairman Tony Cusack paid tribute to the support the council continues to afford Shelbourne, letting them use the Ennis Road park of the same name.

And the first team now has a big aim: for if they get out of Division 1B this year, Mr Delaney has promised the team a trip to see a game of their choice at the Aviva Stadium.

“To come down to recognise the great volunteerism of a club which works with kids in the community day in, day out is absolutely brilliant,” the FAI boss added.