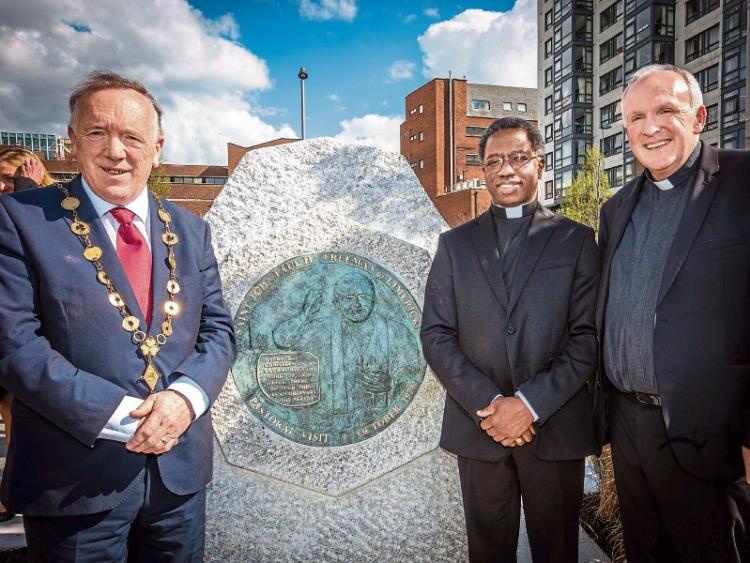 SAINT John Paul II has been immortalised along Limerick’s waterfront, as a €10,000 memorial dedicated to the former Pope was launched in the city centre this Monday afternoon.

Unveiled by Mayor Stephen Keary, Bishop of Limerick Brendan Leahy and Papl Nuncio to Ireland Archbishop Jude Thaddeus Okolo, the memorial is dedicated to the Freeman of Limerick, who visited the city on October 1, 1979.

Bishop Brendan Leahy welcomes the unveiling of the new plaque at Bishop’s Quay, dedicated to St Pope John Paul II, who visited Limerick in 1979. Up to 200 to witness the unveiling @Limerick_Leader pic.twitter.com/nUqbPYmv7o

The idea of the memorial, which stands at Bishop’s Quay, was conceived during the National City of Culture designation in 2014. The plaque was designed by Limerick artist and sculpture Cliodhna Cussen.

The project cost €10,000, and it is understood that it has been funded, evenly, between Limerick City and County Council and the Limerick Diocese.

Mayor Keary said: “It’s only right that we would celebrate his visit. There was never anything like it before and will never be anything like again in this city most likely. The fact that we are doing the unveiling this year is timely given that we have the second ever visit to Ireland of a Pope in August.”

However, this time round, Pope Francis will not pay a visit to the Treaty City, the Papal Nuncio confirmed.

Bishop Leahy said he thinks Pope St John Paul “would be pleased that we are launching this memorial in the year when Ireland will be hosting the World Meeting of Families and when one of his successors, Pope Francis will be visiting Ireland.

“My wish is that all who visit this memorial will draw inspiration from the figure of this great Pope and his words.”

Pope St John Paul II was conferred with the freedom of the city by the then-Mayor the late Bobby Byrne in 1979. His daughter Senator Maria Byrne was present at the plaque’s unveiling.