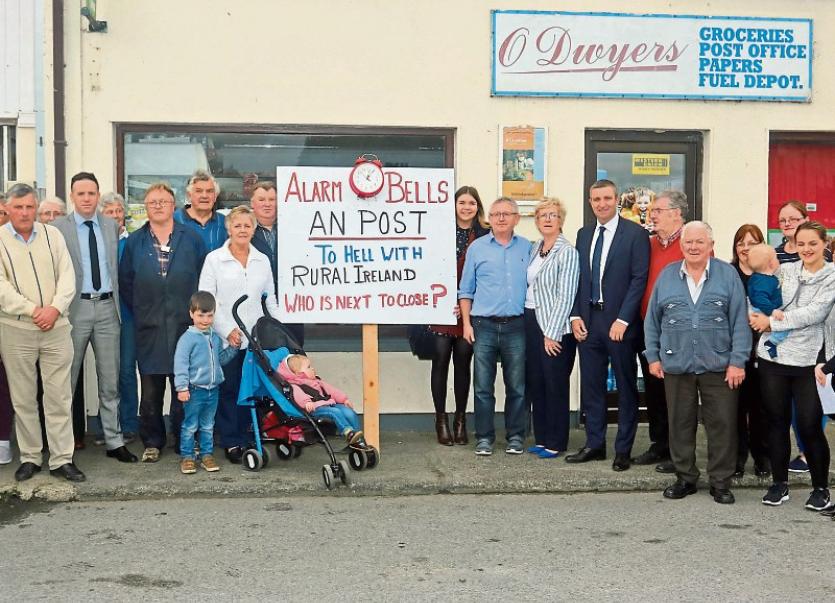 EIGHTEEN post offices around the county of Limerick have been targeted by An Post and offered an exit package as part of a compromise deal hammered out last month between An Post and the Irish Postmasters Union.

The 18 on the Limerick list are part of a national list of 390 and include ten in the general West Limerick area while the remaining eight are in East Limerick.

Already, Tom O’Brien in Broadford has gone on record saying he will not be accepting the package offered.

“It is not compulsory,” he told the Limerick Leader.

But, according to others in the business, it puts individual postmasters and postmistresses in a difficult position, wanting to continue serving their communities but needing to make a decision about their own futures.

“Those who want to accept the package face a backlash from their own community,” according to one source.

The real dilemma, he continued, is that if they choose to remain open, they will remain on old contracts, will not be offered any new business and will see their income decline and eventually will have to close anyway.

In those instances, there will be no exit package available.

The exit package, the Limerick Leader understands, is an offer of approximately two years’ salary. But it is unclear whether this money is regarded as a redundancy payment, in which it would not be taxed, or if it is income to a self-employed contractor and therefore taxable.

An Post has not confirmed which is the case.

In addition, approximately 690 other post offices are to be offered new, seven-year contracts which include certain conditions.

But according to a Limerick Leader source, income stability is only guaranteed for the next two to two and a half years when the current social welfare contract comes up for renewal.

“Postmasters need time and space to reflect on any change with their families and make a decision on their own future,” Minister of State Patrick O’Donovan said.

“What concerns me is the way An Post are trying to bill  it as a big re-organisation and big restructuring when ultimately it will result in a lot of communities not having a local post office.”

He asked An Post if, in the event of a postmaster or postmistress accepting the offer on the table, An Post would advertise for a replacement.

“They failed to confirm that to me,” he said. Instead, all sorts of criteria such as proximity and customer base would be brought into the equation.

However, Deputy Collins pointed out, there is a public service obligation there and the government has to realise that and comply with it.

“The provision of some post offices in some communities is going to be at a cost to the state. Not every post office is going to make profit. The government and An Post needs to understand An Post is an agent of the public.

Fine Gael TD Tom Neville said: “My understanding is that An Post have said there are no post offices earmarked for closure and no compulsory closures. I want to see post offices remain open.”